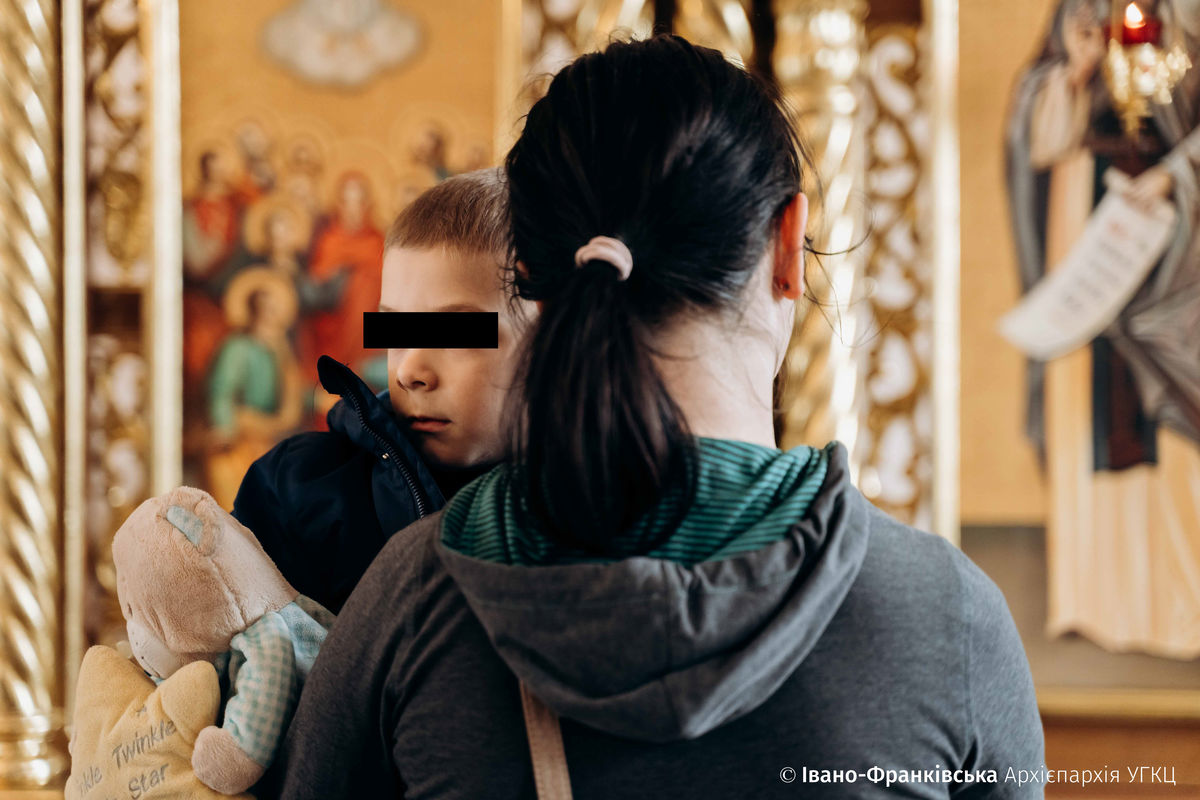 The Archdiocesan Anti-Crisis Coordination Centre has been active in Ivano-Frankivsk since the start of Russia’s military aggression in Ukraine. As of today, the Centre’s staff carry out their duties in the following areas: medical treatments, accommodation, and meals for IDPs, organisation and transfer of humanitarian aid to the war zone.

As part of the assistance to persons who have left the war zone, whilst seeking refuge in our region, St. Luke’s Medical and Diagnostic Centre has been providing free medical services to all those in need for more than a week. In peacetime the Ivano-Frankivsk Theological Seminary of St. Josaphat, at the current stage of its development, is an excellent “spiritual forge” for priestly vocations. It is not only one of the best seminaries in Ukraine, but also plays an important role in the life of the Ivano-Frankivsk Archdiocese, most importantly – educates future leaders for our Church and Ukrainian nation.

Today it houses 142 internally displaced persons, and in total, since the Russian invasion, the seminary has provided shelter for more than 300 people. These are people from different regions where they are currently under fire and bombing by Russian troops. Among them is Nikita, a young man, who has twice been forced to leave his home: first in 2014 from Donetsk, and now from Kyiv.

“Unfortunately, I ended up in Ivano-Frankivsk not in the circumstances I would have liked, but due to the hostilities in Kyiv. When we thought about where to evacuate to, my friend from your city said that there is a place where we could settle. Following our arrival, we understood that this is a very friendly place that is ready to receive not only me but also some of our workmates, “says Nikita.

He says that he was already acquainted with the Ukrainian Greek Catholic Church, as he had studied at the UCU Business School, but now, living in the seminary, he really has the opportunity to get to know the UGCC even better.

“What impresses us the most here is the feeling of security, as well as the friendly attitude. It seems as if we have known the seminarians and fathers who are here for many years. I am very grateful to them for that, ”says Nikita.

Interestingly, despite the visitors, the seminary continues to actively conduct its program of worship. There are about three dozen seminarians and priests remaining, who are involved in volunteer services. Every morning the new residents of the seminary come to the Divine Liturgy. This is one of the most picturesque corners of our Carpathian Mountains. In the Pidlyute region, which was very much loved by the Righteous Metropolitan Andrei Sheptytsky, Christian camps “Happy Holidays with God” are held every year, organized by the Ivano-Frankivsk Archdiocese of the UGCC.

Today 80 people have already been admitted to Podlyute. They are also constantly accompanied by a priest – Fr. Vasyl Filipovych, the administrator of the catechetical centre, who through God’s word, prayer and confession tries to support people who have left their homes to save their lives.

Even during the first working meeting of the staff of the Archdiocesan Coordination Anti-Crisis Centre, the director of the Catholic Lyceum, Fr. Markian Bukatchuk, stated that the institution is ready to accept internally displaced persons at any moment. As of today, 82 people have settled here.

“They live in the classrooms where we have put beds and mattresses. Through our joint efforts, we have provided everyone who lives with us with three full meals daily, which take place in the school canteen, ”says Fr. Markian.

He states that people do not hide their pleasurable impressions and gratitude for, we quote, “being able to feel human again.” In addition, many refugees also live in parish homes of our communities in various villages and towns of Prykarpattia – Pre-Carpathian region. Our priests have worked hard here, organising their parishioners to open their hearts and doors to the needy. At present, more than 450 IDPs live in various parishes of the Ivano-Frankivsk Archdiocese. In total, on the 13th day of the Russian war in Ukraine, the administration buildings of the archdiocese and the premises provided by the parishioners have already provided shelter for almost 1,200 internally displaced persons. In addition to settling and providing medical support at the Medical and Diagnostic Centre of St. Luke, they are all provided with free meals. Most of them try to actively help and become volunteers themselves. For many refugees, living in the administration buildings of the Archdiocese is also an acquaintance with the Ukrainian Greek Catholic Church and its rich historical and spiritual traditions.

We will inform you about the daily activities of the Coordination Anti-Crisis Centre of the UGCC Ivano-Frankivsk Archdiocese in daily news reports. Follow them on our website and social networks.

We are sure that God is with us and together we shall triumph!