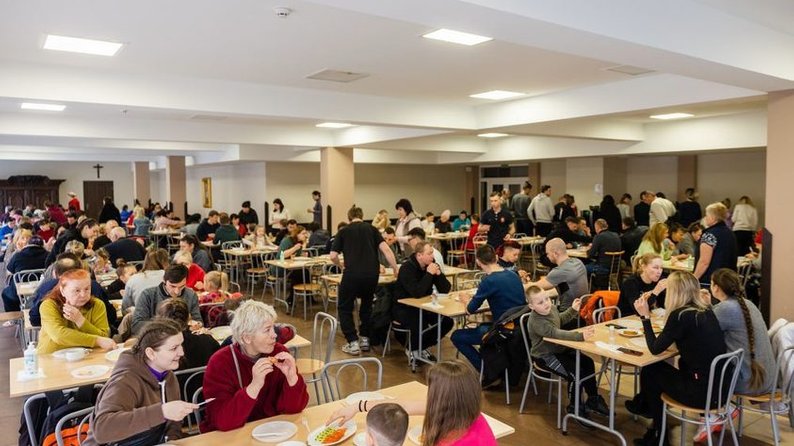 Since the aggressor’s full-scale invasion of Ukraine, the churches of Lviv have actively participated in the accommodation of internally displaced persons fleeing the war. According to the Chairman of the City Evacuation Commission Yevhen Boyko, 85 religious communities have accepted migrants in our city. That being said almost a month, church communities have provided shelter for about 60,000 people from all over Ukraine.

One of the first to open its doors to those internally displaced was a pilgrimage center in Briukhovychi. During this period of time it has hosted more than 2,000 migrants from Kharkiv, Kyiv, Zaporizhia, Donetsk and other cities and towns. Those being hosted are mainly women with children, but also elderly people who were evacuated from the area of ​​active hostilities. It should be noted that the shelter was given to those who needed it, without being tied to people’s religion.

In the Pilgrim’s House, displaced Ukrainians have a safe place to spend the night with a roof over their heads, as well as a full three-course meal, medical and psychological assistance. The center also helps those who wish to cross the border. People were sent to Poland, the Czech Republic, Germany and even Italy. About a hundred people go on the road every day. Their place is then being taken by incoming families. About 250-300 people live in the House every day.

Caritas-Spes of the Lviv Archdiocese and the Ecumenical Committee for Medical and Social Assistance of the Roman Catholic Church, the Ukrainian Orthodox Church, and the Ukrainian Greek-Catholic Church in the Lviv region help to take care of refugees. In this way, victims of hostilities are not only able to fulfill their basic needs, but also receive spiritual and psychological support.