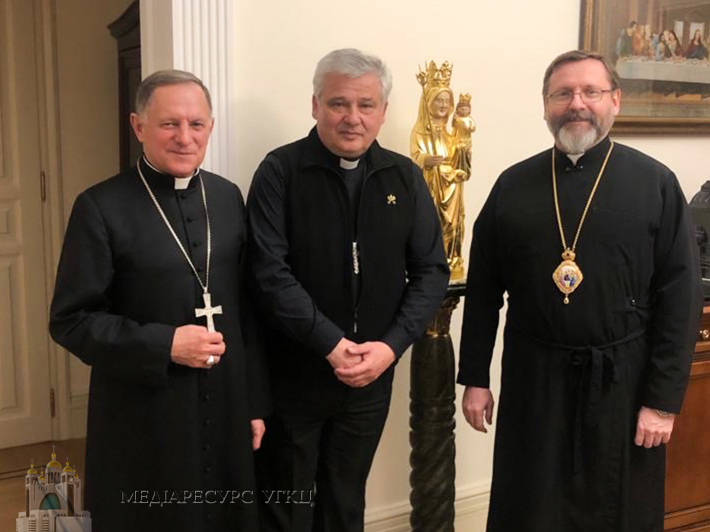 On Tuesday, March 8, Cardinal Konrad Krajewski, the Almoner of His Holiness, arrived in Ukraine on a special mission. The purpose of his visit is to testify to the personal closeness of the Holy Father Francis to the Ukrainian people suffering from the war.

His Beatitude Sviatoslav, the Father and Head of the UGCC together with Archbishop Mieczysław Mokrzycki, Metropolitan of Lviv RCC in Ukraine, met the papal legate in Lviv. Cardinal Krajewski said that he wanted to visit social service centers in Ukraine and meet with refugees and all those who are victims of Russia’s war against Ukraine.

During the meeting, Cardinal A detailed program of Cardinal Konrad Krajewski’s stay in Ukraine has not been published yet, however it is known that on Thursday, March 10, he will visit the UGCC’s social service centers and take part in a joint prayer with representatives of the All-Ukrainian Council of Churches and Religious Organizations., His Beatitude Sviatoslav and Archbishop Mieczysław had the opportunity to speak directly with Pope Francis. The papal legate told the Holy Father about his first impressions of the visit, in particular about what he saw in Poland. The Pope was also informed about the program of his envoy’s visit to Ukraine, which had been previously discussed by the participants of the meeting.

It is important to specify that the papal legate’s visit to Ukraine is not scheduled so far. The Holy Father instructed him to be in Ukraine as long as necessary to provide support for the Ukrainian people on behalf of the Apostolic See in these dramatic moments of its history.

“Pope Francis wants to be present in person through his legate. And this is the purpose of his visit,” the Head of the UGCC emphasizes.

A detailed program of Cardinal Konrad Krajewski’s stay in Ukraine has not yet been published, but it is known that on Thursday, March 10, he will visit the social service centers of the UGCC and take part in a joint prayer with representatives of the All-Ukrainian Council of Churches and Religious Organizations.

Reminding, during the Sunday’s meeting with the pilgrims on March 6, 2022 Pope Francis announced that a special mission of two cardinals – Cardinal Krajewski, the Almoner, in order to provide assistance to the needy, and Cardinal Czerny, Prefect of the Dicastery for Promoting Integral Human Development. As for the Pope, presence of both cardinals is presence not of the Pope solely, but of all Christians who want to stay close, saying: “War is madness! Please, stop! See this violence!”