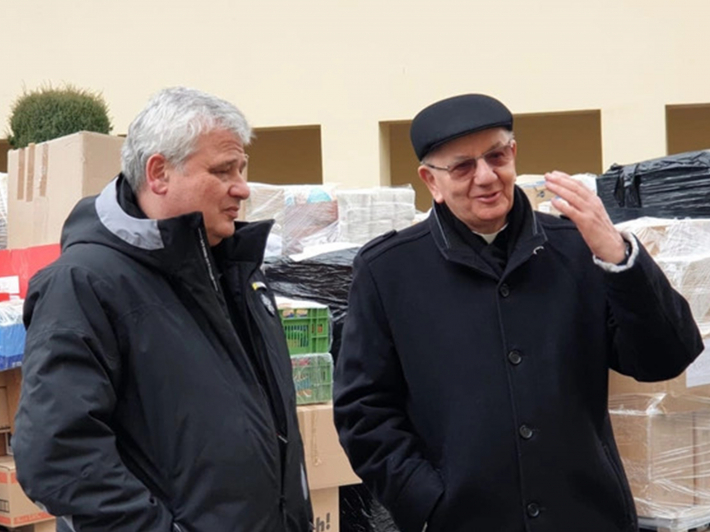 Cardinal Krajewski went to Ukraine through Poland. In the afternoon on Monday 7 March 2022 he met with Caritas volunteers in Lublin and prayed for peace with them, according to the Polish edition of VaticanNews. Cardinal Michael Czerny, on the other hand, will try to enter Ukraine via Hungary.

Cardinal Cerny, a Canadian Jesuit born in the Czech Republic, now serves as prefect of the Dicastery of Integral Human Development. This was reported by the Catholic socio-religious online magazine Credo.

Speaking to Vatican Radio about the mission entrusted to them by the Pope, Cardinal Cherny said that it was a concrete sign of Francis’ solidarity with the suffering people of Ukraine and an opportunity to oppose a brutal war that takes the innocent as victims. Cardinal Cherny mentioned a photo of a mother with children trying to escape from bombed Kyiv. This photo shows the Golgotha ​​of our time, he said: innocent life, which is taken away in such a barbarous way. By exposing such crimes, we should all feel called to an examination of conscience: what is each one of us is bringing into this atmosphere of violence and aggression. The Jesuit cardinal also pointed out the similarity of the suffering of Ukrainians to the long conflicts forgotten by the world.

In his mission in Ukraine, he also plans to draw attention to people from other continents, such as Africans and Asians who work and study in Ukraine and who also suffer from fear and resettlement and have the same right to seek safe haven.

“We need to see what can be done, because this is obviously the point that can cause special suffering, and it is very delicate and difficult to deal with in a situation of tension and haste. Here, too, one must fight rejection and misunderstanding. (…) In situations of increased migration, the phenomenon of human trafficking also appears. It uses great confusion to turn its trade around, especially using those who are the weakest. It will also be a special dimension of our mission’s interest and concern.”

In Lublin Cardinal Krajewski met with volunteers who help refugees and gave them a papal blessing, writes Gość Niedzielny. The cardinal talked with the Metropolitan of Lublin, Archbishop Stanislaw Budzik, and visited the local Caritas center with him.

“I am very pleased to meet so many happy people, that is, blessed ones, who help Christ in another person. Don’t stop this,” said the papal envoy to the volunteers gathered in the square in front of Caritas Lublin. “Here, in the House of Hope, there is a chapel. In the whirlwind of labours, run there from time to time and say: ‘Jesus, I trust in You.’ Tell Him, ‘Jesus, do this, for we are doing this, and the results are futile. But when you do that, everything can change.'”

“We can stop this war with prayer. A part depends on us, but everything depends on God,” the hierarch emphasized. The cardinal noted that Pope Francis is very busy with visits and talks every day, but from 7:00 pm to 8:00 pm he “goes out in the sun” in front of the Holy Gifts, “gaining colours” of God and His logic. “Sunbathe” at the adoration and you will see: you will be strong in what you do”, said the papal envoy. Helping refugees from Ukraine in this difficult time is the “pure Gospel.”

Representing the Pope as an Apostolic Benefactor, he himself always wonders what Jesus would do in a particular situation. “When I was leaving Rome, Italian journalists asked me if I was afraid to go,” said Cardinal Krajewski. “I said I was afraid of the wrath of the Lord God, that I could not represent Him by covering myself.”

“The Pope is sending us to Ukraine to convey his blessings to the people”, the hierarch said. “We want to tell them that they are not alone, that in addition to weapons and what they are doing to liberate their country, we have prayer, and prayer has great power, can move mountains, and even more – to stop the stupid war”, said the cardinal.

He then, together with Archbishop Budzik and the Lublin Voivode, visited refugees in Chełm and Dorohusk, where there is a border crossing between Ukraine and Poland, and entered Ukraine last night. In Dorohusk, in particular, the papal envoy was impressed by the way Poles receive Ukrainian refugees, Niedziela reports.

“Europe is surprised that refugees can be received in this way,” he said. “It is not clear to the West that some people are settled hundreds of kilometers from the border, in the homes of Poles. One can only admire how wonderfully organized it is. And besides, everyone – employees and volunteers – is smiling. They don’t care about time, money, they accept everyone.”

The cardinal recalled his stay among refugees on the Greek island of Lesbos, where refugees remain. “There are camps everywhere, not to mention ghettos, where people spend even a few years; while in Europe, they cannot enter Europe,” said the papal almoner. Poles share not only everything they have, but above all good, love. “This is a completely new quality, Europe does not know this,” he said.

The cardinal also noted that more than a million people have already crossed the Polish border and that they are not exclusively Ukrainians, but people of different nationalities. And all of them are received equally warmly in Poland. “Despite the fact that Europe labels us as if we are intolerant, that we do not let everyone in – the truth is that all refugees from Ukraine who are threatened by war have access to Poland.”

The cardinal brings help and papal intimacy. “I spoke today with the bishops in Ukraine, who said they would not leave as long as there were people there. I want to bring them all the best gift, our weapons: rosaries from the Holy Father. Because prayer has power and strength,” Cardinal Krajewski emphasized. “I am going with a spiritual message to Ukraine, whose people are strong in faith and love for the homeland. Their faith moves mountains! They believe that despite the various shortcomings they have, they can defend their homeland. I want to bring them the message that the Pope is always where there are those who suffer, who are persecuted, where people are being killed. Because Jesus is always on their side.”

On the way to Ukraine, via Przemyśl, the cardinal was again asked if he was not afraid to enter the war zone. “I am afraid, as everyone is afraid,” replied the hierarch, “but I was in confession before leaving, I have no debts, I wrote a will. I ride free, presenting the pure Gospel. I want to be with those people. I spoke today with a priest who had traveled thousands of kilometres to return to his parishioners; with the Bishop of Kharkiv, who said that, despite the bombing, he would not leave the city as long as the faithful were there. He wants to be with them so that together they can show that our values ​​are the most valuable!”