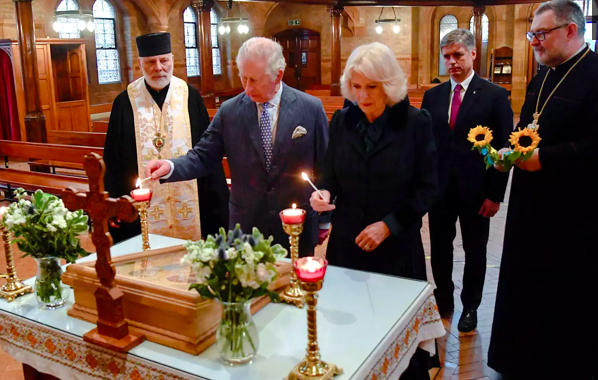 Prince Charles denounced Russia’s attack on Ukraine on Tuesday: “In the stand we take here, we are in solidarity with all those who are resisting brutal aggression”

Prince Charles and Camilla, Duchess of Cornwall met with Ukrainians in London to show their support amid Russia’s invasion of the country.

Prince Charles, 73, and Camilla, 74, also heard a song performed by the children before lighting a candle and laying sunflowers, the national flower of Ukraine, at the altar.

Prince Charles denounced Russia’s attack on Ukraine on Tuesday in a speech during a visit in Southend-on-Sea, England, for its City Day.

Queen Elizabeth‘s heir described the murder of Sir David Amess, a Member of Parliament who was killed in a terrorist attack outside of his constituency surgery in October 2021, as “an attack on democracy” before touching on the tragedy currently unfolding in Europe.

What we saw in the terrible tragedy in Southend was an attack on democracy, on an open society, on freedom itself,” Charles said. “We are seeing those same values under attack today in Ukraine in the most unconscionable way. In the stand we take here, we are in solidarity with all those who are resisting brutal aggression.”

Zelenskyy tweeted that he and his wife, Olena, “are grateful to the Duke and Duchess of Cambridge @RoyalFamily that at this crucial time, when Ukraine is courageously opposing Russia’s invasion, they stand by our country and support our brave citizens.”

“Good will triumph,” he added.