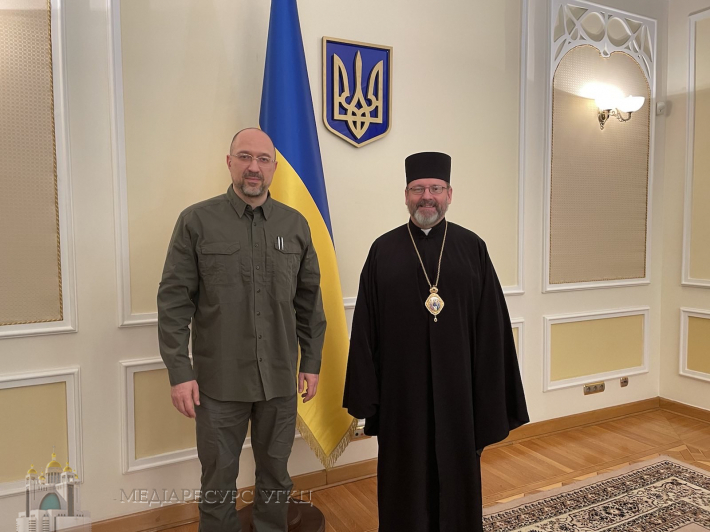 On Monday, March 28, in Kyiv, His Beatitude Sviatoslav, the Father and Head of the UGCC met with Prime Minister of Ukraine Denys Shmyhal. The meeting took place at the request of the Head of the UGCC.

His Beatitude Sviatoslav, most of all, expressed his personal gratitude to Prime Minister and the governmental officials for their courage during wartime. The Head of the Church also thanked the Head of the Government for the cooperation between the Church and the State in the circumstances of the war and assured of the prayerful support of the UGCC.

The parties also discussed the economic and humanitarian circumstances of Ukraine’s life during the war. The Prime Minister spoke about the challenges which State’s economy is facing and the damage caused by the war, and shared the Government’s vision for responding to these challenges.

The Head of the UGCC introduced the ways in which the UGCC is serving in the conditions of war, especially in war zones. In particular, His Beatitude Sviatoslav spoke about the logistics of delivering humanitarian aid, assistance to people who are trying to evacuate from the war zone, and assistance for internally displaced persons in central and western Ukraine and Europe.

Denys Shmyhal expressed gratitude to the Church for the model of devoted service to the people. According to him, Church is an important institution for providing emergency humanitarian aid where it is most needed.

During the meeting, the parties exchanged views on how to integrate internally displaced persons so that Ukraine’s economy can work for their benefit, and discussed ways to help small and medium-sized businesses during the war in Ukraine.

The UGCC Department for Information