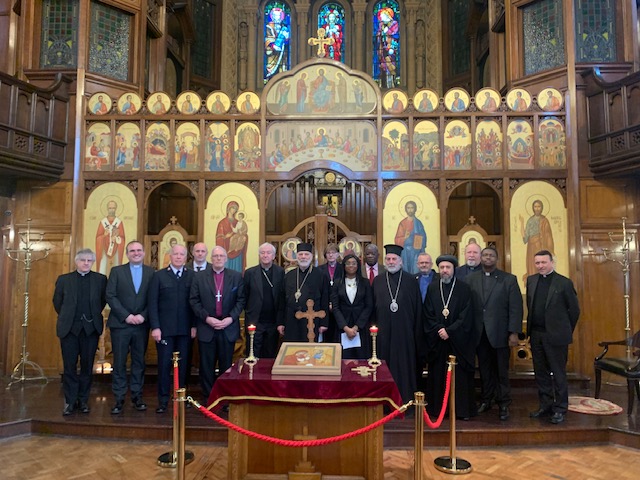 Christian leaders in London have sent the following letter to Prime Minister Boris Johnson today, urging the government make it possible for Ukrainian refugees to enter the UK as quickly as possible. At the present time, hundreds of desperate women and children, disabled and elderly people with family in the UK, who survived the arduous journey from Ukraine to France have been kept waiting for days while the British government establishes a procedure for granting them visas.

The text of the letter and full list of signatories follows:

We London Church Leaders met today at the Ukrainian Catholic Cathedral of the Holy Family to pray with Bishop Kenneth Nowakowski and his people and to share our concerns at the greatest humanitarian crisis since the end of the Second World War now unfolding in Europe. We are encouraged by the government’s family sponsorship programme and welcome the intention to establish a pathway to humanitarian sponsorship.

As the number of Ukrainian citizens seeking shelter outside the borders of Ukraine is estimated to reach close to two million, we cannot but emphasise the urgency to act swiftly and without delay.

As the children and grandchildren of those who experienced the horror of war seven decades ago, it is our moral obligation to provide protection and hospitality to those who are undergoing the same horrors today, unthinkable as that may seem in the 21st century.

Just as so many British children were sent to the countryside far from harm’s way during the bombing of London, so today tens of thousands are hoping to find refuge far from Russia’s relentless, unconscionable, and indiscriminate attacks on homes, hospitals and schools throughout their homeland. Surely, we feel compassion today for Ukrainian mothers with young children, the elderly and those with disabilities, who have undertaken dangerous and arduous travel, and look to the United Kingdom with hope and are now reaching out to us in Ukraine’s greatest hour of need.

How can mothers with young children, the elderly and the disabled, who have travelled a thousand miles be expected to complete online application forms in a language foreign to them? Times of war require swift action and flexibility, the easing of normal procedures and the removal of complex bureaucratic obstacles that can easily turn hope into despair and resignation.

We would ask that sponsorship not be limited to those with family members in the UK, but that those sponsorship criteria be expanded to include all Ukrainian refugees on humanitarian grounds, allowing them to enter the UK as quickly as possible.