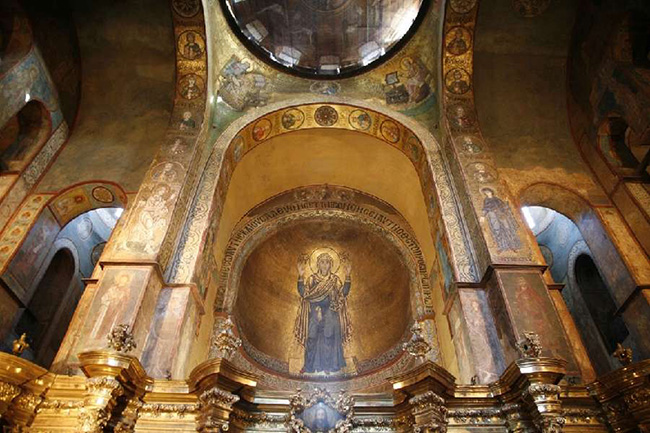 The Head of the UGCC Sviatoslav Shevchuk Save St. Sophia Cathedral

Intelligence sources are revealing that there is a plan for the Russian invaders to destroy the 1,000 year old cathedral of Holy Wisdom, St. Sophia, in the historic heart of Kyiv. Speaking from a bomb shelter, His beatitude Sviatoslav is appealing to the world to save the church of God’s Holy Wisdom. “We have received information that the Russian army plans an air strike on the most venerable holy site of the Ukrainian people since the time of Kyivan Rus — the Cathedral of Saint Sophia in Kyiv. His Beatitude Sviatoslav, Head and Father of the Ukrainian Greek Catholic Church, calls upon all Christians to pray for the protection of this holy site of all Slavic peoples and calls upon the aggressor to refrain from this most horrific act of vandalism.”

For a millennium St. Sophia has been a symbol of faith, fortitude, and unity for all Ukrainians.  It was one of the few medieval churches to survive Stalin’s destruction of churches in the Ukrainian capital in the 1930s. It survived a thousand years of invasions, including World War I, the Russian Revolution, seven decades of communism, and the devastation of World War II.

On February 21, President Putin argued, in an attempt to rewrite history, that fundamentally  Ukraine does not have a past, present, nor future. His Grace Metropolitan Borys of Philadelphia reflected: “The destruction of Hagia Sophia would be an attempt to obliterate the most important spiritual and national symbol in Ukraine.”

The ministry of the defense of Russia has put out a public statement that the capital city of the country will be subject to bombing and rocket fire. Such a threat has as its goal to press Ukrainian President Zelensky to capitulate and to create further panic in a city of three million people.

For the past three days, the citizens of Kyiv have been safeguarding in bomb shelters.

Over the past 24 hours, many non military buildings and objects have been subject to missile attacks resulting in countless deaths of innocent citizens.

“May Saint Sophia — the Wisdom of God — illuminate those who have considered committing this crime”, His Beatitude Sviatoslav

Archbishop of Philadelphia, Metropolitan of Ukrainian Catholics in the United States  Head of the Department of External Church Relations, Ukrainian Greek Catholic Church