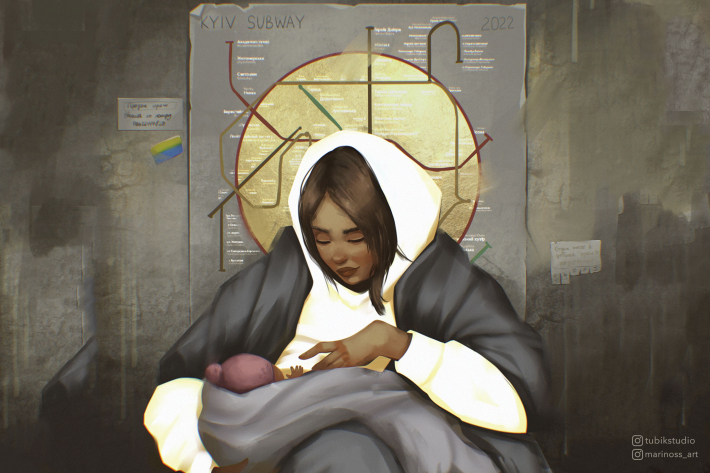 Today it is 17 March 2022 here and we are experiencing already the twenty-second day of war. We are beginning the fourth week of this great horrible and unjust aggression against Ukraine.

But every morning I am able to tell you that Ukraine is standing, Ukraine is fighting. As our national anthem states, “Ukraine’s glory and freedom has not perished! Still upon us, O Ukrainians, fate shall smile!”

But when we speak of our homeland, our Ukraine, which is standing, which is fighting, I see before my eyes the image of a woman. A woman as a symbol of Ukraine. A woman who bears the unbearable burden of war, who amid the grief of death keeps vigil over life. A woman who builds and defends the future.

Every day when we talk to people who come to our parishes, especially in Kyiv, Kharkiv, Zaporizhzhia, Odesa, we see first of all women. Women who care for the elderly and feed their children. When we care for our people who are hiding in bomb shelters, we see first of all women. The woman is today the symbol of the strength and courage of Ukraine. Perhaps it seems odd: courage and woman.

It used to be that courage was always associated with a man, but here we see the female strength that gives Ukraine hope.

Today we especially gives thanks and pray for our girls, our women in the Armed Forces of Ukraine who today  with arms in hand defend their homeland.

A image has circulated throughout the world of the so-called “Kyivan Madonna,” a young woman who is breastfeeding her newborn child on the steps of a bomb-shelter in Kyiv.

But we are behold today the face of women who are forced to flee her homeland with her children and travel abroad. Today we hear about more than three million refugees.

Until this time Europe, especially Italy, has seen women who travelled for work. The Holy Father called them heroines who once more brought the Christian faith and Christian values to Italy families.

Today Europe has seen mothers who hold their children by the hand, rescuing them from war, but their parents turn back to defend their land with arms.

Who can fully comprehend the pain of a woman, a mother, who mourns the death of her son killed in war? Or a woman who has lost her husband, brother, or sister? But most of all we are amazed by women who stand in prayer before God. Women who are like the Kyiv Oranta, the Unshakeable Wall, who day and night with upraised arms prays for her city, prays for her country.

Today the woman is the symbol of hope for Ukraine, a symbol of fearlessness, a symbol of victory of life over death, a symbol of the fact that Ukraine will stand even through such inhumane circumstances.