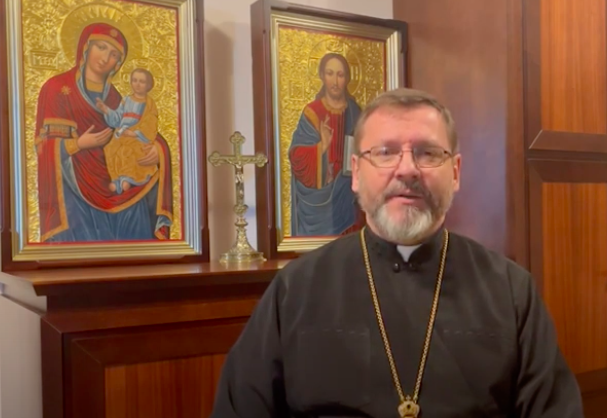 Today is 19 March 2022 and Ukraine is experiencing already the twenty-fourth day of this bloody, unjust war that the Russian aggressor began against the peaceful Ukrainian nation.

Today, particularly this night, Ukraine continued to defend itself.

Today I would like for us to turn our attention in prayer to the immediate victims of this war, the injured. Ukraine today does not fully know how many people have been traumatized, injured, received various grave wounds during this war. We should particularly remember in our prayers today our wounded soldiers who in their bodies bear the wounds of Ukraine in a particular way, giving up their life and health for our freedom.

One could say that today the number of wounded according to various degrees of severity are in the thousands in Ukraine. The whole Ukrainian land today is filled with crying and sighing from the wounds of human bodies, from the wounds of people. And how many spiritual wounds do people receive today in Ukraine! We cannot even begin to understand today in order to speak about it properly.

Today I would like to particularly address all those who hear me, who are listening in Ukraine and throughout the whole world. One of the martyrs of communism, Father Lesiv, said once: “Let us not be afraid to allow human suffering into our heart, because precisely this suffering will make us Christians!”

Today we must know how to empathize, to suffer together with those who endure, especially those who endure pain because of their own wounds which they received in the context of the war in Ukraine.

It is so important for us to know how to suffer together with our neighbours.

It so happens that many people all over the world, who today hear about the war in Ukraine, grew up in one or another way having played video games. And sometimes for them, the word “war” might mean a game, some kind of spectacle, another form of some kind of television show. And there is a danger that even these horrible scenes of war are seen by people all over the world in this way. They see how they crucify Ukraine. They are tearing Ukraine to shreds, they are wounding her. They might see this without worrying about the pain of the Ukrainian people.

I want to appeal to all of you: Do not close your hearts before the pain of Ukraine! For one day the Lord God will tell you: I was wounded in Ukraine, and you turned your face away from Me…

Today I would like to address international organizations and the civic mind of the global community. I do not believe that humanity today is powerless in the face of war.

All of us together can and must stop the war in Ukraine! Do not be deaf to the sighs, the cries, the tears of thousands of people in Ukraine. Open your heart to them! And let us together do everything to end this horrible war.

May peace triumph over the war in Ukraine!

Most pure Virgin Mary, Ukraine and Russia are preparing today for consecration to your Immaculate Heart. Receive under your Protection our Ukrainian people. As a good mother, help to be victorious over the war in Ukraine.

Most holy Theotokos, Immaculate Heart of Mary, save us. Amen.