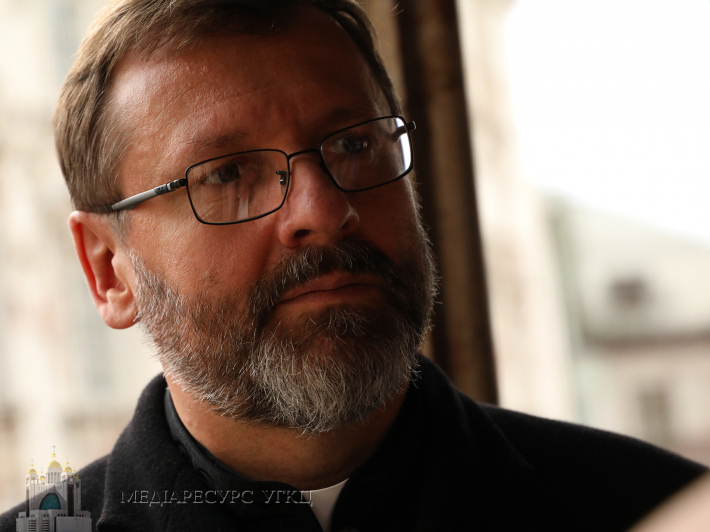 Today is March 6, Sunday. Ukraine is experiencing the eleventh day of this horrible war. But with this short blessing allow me to bless you from the holy hills of Kyiv. On this day, I would like all of us, with the eyes of God’s love, to behold the much suffering Ukrainian land. I want to share with you the pain of our Kyiv Archeparchy, which was deeply wounded yesterday with the shelling of the peaceful cities and the peaceful residents of Ovruch, Korosten, Zhytomy region, Bila Tserkva. Ukraine is becoming a battlefield where a war is being waged primarily against the peaceful population. We are also greatly pained by the situation in the suburbs of Kyiv—Irpin, Butcha, Vorzel—where it is impossible to evacuate the peaceful population. We saw yesterday how  women and children were shot live while they were attempting to escape this boiling environment. Despite various efforts, green corridors, humanitarian corridors were not provided to save the civilian population of Mariupol, which became almost totally besieged, with a population of almost 400,000.

Today in our prayer we must remember particularly our Kharkiv, our Chernihiv, our Sumy, which are suffering from the bombardment of its peaceful population. The Kyiv Archeparchy is flowing with blood. As its bishop, I cannot but lament the death of my children. But yesterday I also had the opportunity to visit the checkpoints around Kyiv. I would like to thank our soldiers, the girls and boys, who truly with their bodies shield the peaceful population, professionally and with their complete conscience fulfill the difficult duty of defending their homeland.

In Ukraine there is a war being waged against its peaceful population.

I would like to address the whole world: let us do everything possible so that the weakest and most innocent people might not suffer in Ukraine. I appeal to the various international organizations: help to stop this humanitarian catastrophe that is developing before our eyes.

Today, the majority of our children who follow the Julian calendar will be entering upon the time of Great Lent. Today is for us Cheesefare Sunday, also known as the Sunday of Forgiveness. It is difficult to speak of forgiveness in the midst of war. It is difficult to speak of forgiveness when looking into the eyes of an enemy who has no moral framework and is killing the peaceful population. But forgiveness is the secret to victory. First, God forgives us, thereby destroying sin and eternal death. That forgiveness is the secret of man over his own sin.

On this day, let us ask the Lord God for the forgiveness of all our sins, for the sins of our nation. Let us conquer our enemy, the devil, in our heart through the reception of forgiveness from God and the granting of forgiveness to our neighbour. Let us pray for our enemies, who came to our land to kill, that the Lord God might stop their murderous hand.