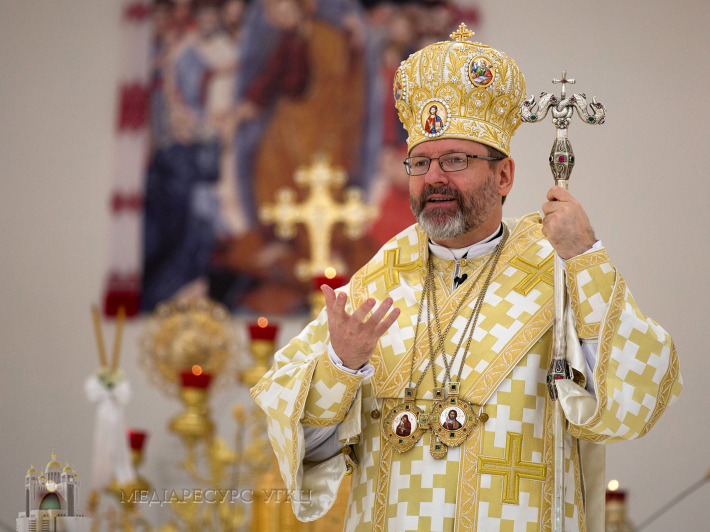 Today is 23 March 2022. Ukraine and the Ukrainian people are already going through the twenty-eighth day of this way of the cross, its Golgotha, this war that Russia started against the peaceful Ukrainian people.

We are living through tragic, painful times. But such times give birth to heroes. Heroes who, out of love for their people and homeland, are ready to make any kind of sacrifice, even the sacrifice of their own lives.

These days, speaking with various people, with volunteers, clergy, military, government offices of various levels, in particular with the central government, it seems that our Ukrainian people have really come together to stand through the battle.

We talked so much together about unity: church unity, national unity, even political unity, speaking about this unity as if in a dream. But today this dream has become a reality.

We see how the people unite to defeat the enemy who is trampling upon Ukrainian soil. We see that everyone feels the mandate of their own conscience in order to persevere and be victorious.

We feel that, indeed, this war is not a war in which only the Ukrainian army is fighting. This is not a war waged by the enemy against the president or the Ukrainian government for one or another ideologically contrived motive. The Russian aggressor is waging war against the Ukrainian people. And this war has all the hallmarks of genocide, the extermination of people, our cultural heritage, our spiritual tradition.

And precisely in this patriotic war all the Ukrainian people came to the defence of their homeland. And when we say “people”, we mean all the residents of Ukraine, regardless of their national or  ethnic background, of their church or religious affiliation, and even regardless of whether you live in Ukraine or abroad. We feel that victory is a common matter. And in that national unity, we feel the foretaste of victory.

It is very important that everyone, each one of us, everyone who hears me join in this holy and great cause. That “Miracle on the Dnipro”, which is unfolding before our very eyes, is turning out to be a kind of matter, a work blessed by God. We fight and do battle for victory, but this victory is given to us by our Lord God.

Today I would like to express my special thanks for a very unique event that took place on Monday, literally the day before yesterday, in Jerusalem. At the initiative of the international Elijah Interfaith Institute, an international, interfaith, inter-church prayer for peace and victory of Ukraine in this war took place in front of the Cathedral of the Russian Orthodox Church in Jerusalem. The Latin Patriarch of Jerusalem, His Beatitude Pizzaballa, personally took part in this prayer. Representatives of the Melchite Greek Catholic Church, various Protestant, Anglican, and other communities, intellectuals, leaders, religious figures of the Jewish community, Islamic thinkers, and religious leaders took part. I would like to thank you very much for the fact that this prayer took place and a corresponding declaration for an end to the war in Ukraine was signed.

Jerusalem and Kyiv feel a spiritual relation. Kyiv was built as a new Jerusalem. May this prayer, this movement against war, spread to other centres of religious and spiritual life throughout the world.

Let us pray together. Let us pray before the cathedrals of the Russian Orthodox Church throughout the world for peace in Ukraine. We shall see that the Lord God will hear our prayers and this war will be won. May the Lord God bless all of us.

May the blessing of the Lord be upon you through His grace and love for humankind, always, now and ever, and unto the ages of ages.