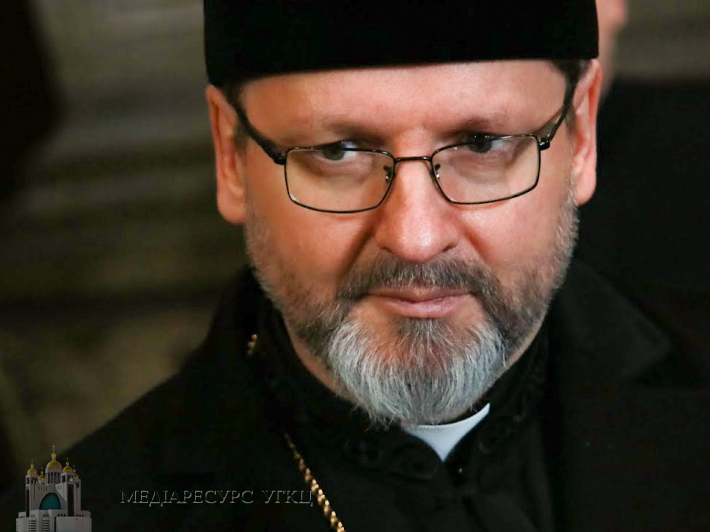 Today is 24 March 2022 and today precisely a month has passed since this terrible war began against Ukraine, against the Ukrainian people. We are already referring to this war as the Patriotic War. A war, which has already taken so many lives, has brought so much destruction and devastation.

In those days I had to visit the wounded, our wounded defenders, to speak with them. And the first impression that still touches me deep in my heart is that I did not see a sad face on any of them. When I greeted them, I held their courageous hand in my hands, but the rest of their body, the whole body was wounded. This soldier, this person, this woman, smiling, told me about victory, the victory of Ukraine. And everyone asked for prayer so that they could return to the army as soon as possible, and again side by side with their fellow sisters and brothers to defend our homeland. Their faces, their eyes, their supplications shine with hope for all of us. With the hope that the truth will be victorious. That even a wounded warrior defends his homeland with prayer, thought, words of inspiration, and encouragement for all those who doubt or may be confused.

I ask everyone to pray for all those who were wounded in this war, because we do not even know their number. They need our attention and support so much.

But today, I especially want to address Ukraine and the world, all statesmen of the world’s nations, to the leaders of religious communities, churches, denominations. The greatest pain of Ukraine is the city of Mariupol.

Remember, a few weeks ago we said that we were struck by these mass graves of civilians, which we saw for the first time since World War II and Stalin’s repressions. So, today I want to tell you that the city of Mariupol is covered with the lifeless bodies of hundreds, thousands of people who have no one to bury them.

So today I want to raise my voice in the name of this heroic, dying city: Let us save it! Let us defend life! Today, this city needs humanitarian corridors. It needs even the international community to help break through the siege and bring humanitarian goods, which we have, to those who are slowly dying of hunger today.

Last week, these people survived on snow that was melting and could thereby have drinking water. Today there is no more snow in Mariupol. Let us save this City of Mary! Let us do everything to save this city, which really is today a place of clash of good and evil, a place where the fate of Ukraine, Europe, and the world is decided.

O Mary, Mother of God, save Ukraine! Save your children! O Mary, help us to conquer the war!