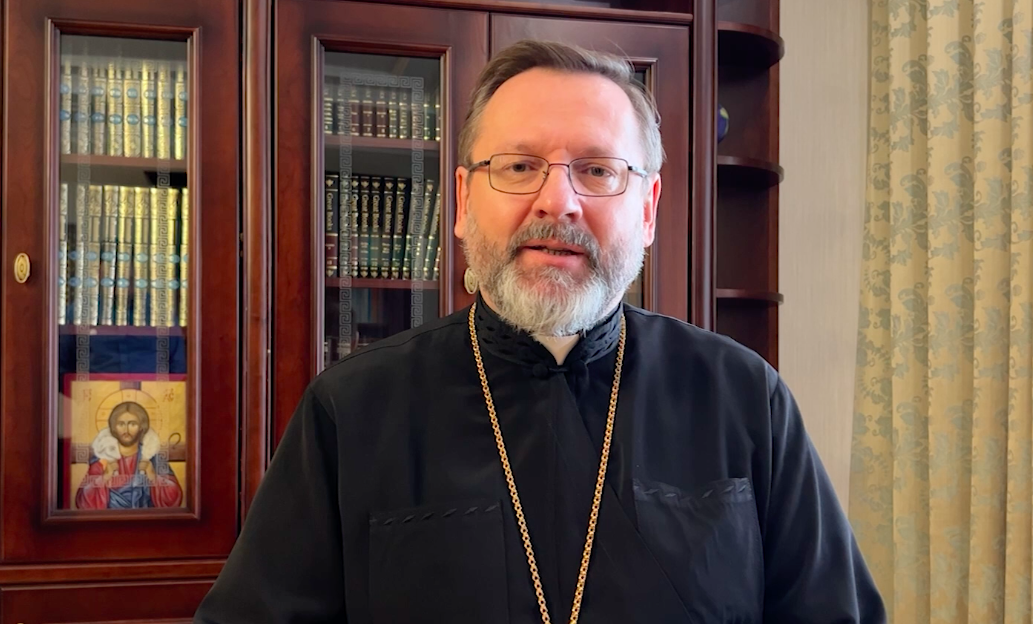 Today is Wednesday 20 April 2022 and Ukraine is already experiencing 56 days of nationwide confrontation, fighting, resistance against the Russian aggressor.

Ukraine has experienced a dramatic day and night. Heavy, bloody battles are going on in the east of our homeland, in particular, in the Donbas, in Slobodianshchyna, in the south of our homeland.

Especially in these days, we pray, worry, and fight for our glorious Mariupol, which heroically opposes the enemy. Mariupol today appeals to the conscience of Ukraine and the world for salvation, for opening the necessary humanitarian corridors in order to save people’s lives. More than 100,000 civilians are still trapped in this death trap. For several days now, no humanitarian corridors have been opened. This is the task of all of us—in spiritual, civil, diplomatic circles—to save the lives of people in Ukraine.

We are experiencing Holy Week in Ukraine. Today is Wednesday of Holy Week, a day that has a special theme. The liturgy of this day brings to our attention a tragedy that happened among the Twelve Apostles.

Today we reflect on the “mystery of betrayal.” One of the apostles, Judas Iscariot, came to the spiritual authorities of Jerusalem and said, “What will you give me to deliver Him to you?” A disciple of Christ who witnessed the miracles of Christ, who listened to His sermons every day. Together with the apostles, he accompanied our Saviour in all His journeys. He witnessed His prayer. He witnessed His good works, works of healing with respect to all who were in need. Today he sells the One Who is without price.

And this phenomenon of betrayal, which the Holy Gospel describes to us, has two aspects:

The first aspect is the disciple’s attempt to use the teacher to achieve his own goal. We do not fully understand what ruled Judas. But it was clear that it was not God’s thoughts that prevailed in his heart. And in the end, when he saw that he could not use the teacher as a tool for his own purpose, he simply betrayed him.

The second aspect is to set a price for what is priceless. It so happens that a thief who steals never respects the true value of the stolen item. He always tries to sell it for nothing. He thus devalues ​​what he has taken from another. Today, by giving his Master over to suffering, the disciple does not simply devalue the One Whom he considered his teacher, he puts a price on ​ human life. And, in fact, he puts a price on the One Who has no price, Who is the Lord God Himself.

Obviously, today we ask ourselves: How do I live my life? Do I sometimes not have the temptation to betray? Or sometimes, do I not try to put a price on the priceless, and to bargain something for my own gain?

War is a terrible moment when all secrets are revealed. Along with examples of heroism, we have examples of barbarity. We have examples of betrayal. We see that even those whom our people considered their elected officials, who were entrusted with power in Ukraine at the local level or were even elected as deputies to the Verkhovna Rada, trade or bargained with Ukraine. Ukraine our Mother, our people who are fighting for their right to life—they are invaluable. It is impossible to set a price for them. And what is human life worth, which is priceless in God’s eyes?

Today we see how sometimes the invaders value human life less than the price of a mobile phone or a household kitchen appliance.

Today, on this day, we ask: O Lord, deliver us from the sin of betrayal and the sin of devaluing human life! O God, forbid also the devaluation of God’s mercy, in relation to each of us! O God, send Your strength, Your grace to the defenders of Ukraine, thanks to whom we see the morning today, and on this morning we are able to experience communion with God! O God, give strength to all of us to overcome all traitors! And by the power of fidelity to our oath, to our vocation, to accelerate, to bring the day of victory of Ukraine closer!