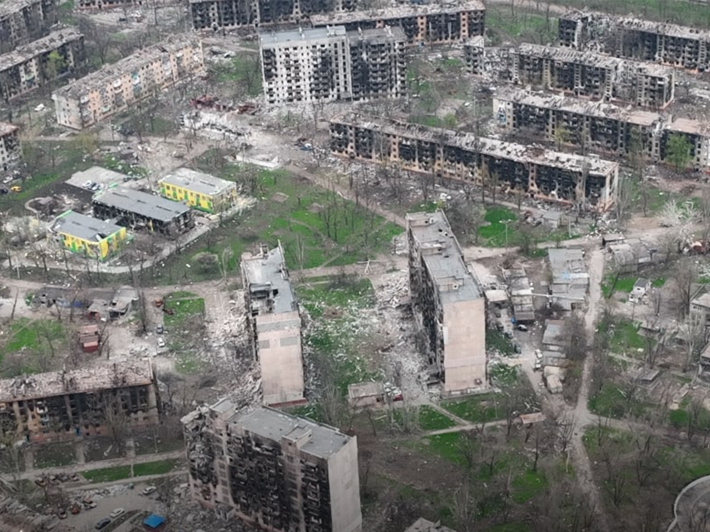 Today is Bright Monday and Ukraine is going through 61 days, the beginning of the third month, of the nationwide confrontation and resistance to Russian aggression.

This Monday 25 April 2022 we are experiencing Easter joy on the one hand, but on the other hand we see how the enemy does not stop killing for a moment, even during these holy days.

In particular, yesterday, last night, the enemy again destroyed our Poltava region with missile strikes. They tried to attack troops along the entire front line. And we mourn those people who live in the immediate vicinity of these war zones. Wounded Kharkiv is crying, as it continues to be fired upon even from the territory of the Russian Federation. And even yesterday explosions were heard and bombs fell there.

We worry and pray for heroic Mariupol which stands, stands for the third month. Mariupol is truly a martyr city. We see how in the city the occupier begins to dig new mass graves for thousands of people, whom he dumps into those mass graves.

Azovstal, that former giant of the metallurgical industry of Ukraine, has been turned into a fortress. There are a huge number of people in its cellars. There are children who have not seen the sun for a month and a half. Mariupol cries out to the world: Stop this war! Do everything possible to save people’s lives!

We see another great calamity. The occupiers are dismantling our factories and enterprises en masse in the territories they have occupied. They are then exported to Russia and they turn those plants into concentration camps where so-called filtering operations are carried out, some people are shot, others are deported to Russia, and others are forcibly mobilized into the Russian army.

The Ukrainian people are crying out to heaven and to the world for solidarity, for salvation, and for help. But Ukraine is standing! Ukraine is fighting! Ukraine celebrates Pascha!

Today, on this Bright Monday we celebrate the patronal feast day of our Patriarchal Sobor of the Resurrection of Christ in Kyiv. This cathedral, which is the main temple of our Church and the heart of the world community of Ukrainians, which unites, gathers the children of her Church both in Ukraine and scattered around the world.This cathedral is truly a gift of God to the Ukrainian people. Standing on the banks of the Dnipro River, it has become, indeed, a motherly home, a home for rescuing the lives of her children. We have seen how during the Maidan, the Revolution of Dignity, it became a warm hearth for her children. Wounds were bandaged and those in need of emergency medical treatment were treated. During the pandemic, a vaccination center was opened there for those who wanted and had the courage to be vaccinated, as well as a center where they lent oxygen concentrators to save lives. During the war, its crypts became a bomb shelter where about 500 people were rescued, clothed, warmed, fed, and treated almost every day and every night.

This Sobor, indeed, gathers and is a gift of God to us. It is a testimony of how the Church, as Mother, serves her people, preaching the Word of God, preaching the faith of the Risen Jesus, giving people protection and hope.
We know that after the Resurrection, Jesus Christ came to His disciples, appeared to them in His risen body. But it was always necessary that someone believe in the Risen One so that everyone could meet our victorious Saviour. So today in our Patriarchal Sobor, believers gather to show the Risen Christ to Ukraine and the world.Today our cathedral has become a center of pilgrimage for the Ukrainian army which comes there to draw the power of victory from the Risen Saviour to defend their land.

O God, bless Ukraine! O God, bless the Ukrainian army! O God, let each of us meet You, the Risen One, to know You, to believe in You, and to live in You and with You!

Christ is Risen! Truly He is risen!