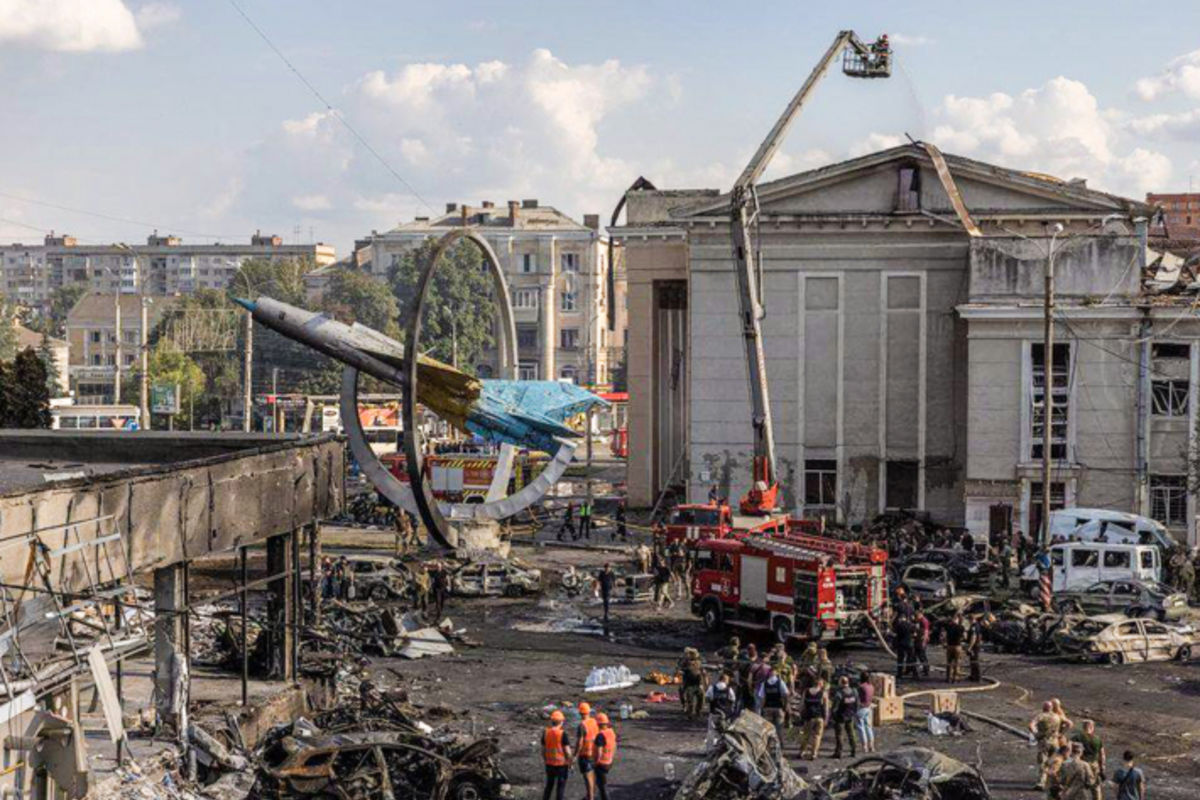 Today is Friday 15 July 2022 and the Ukrainian people have been bleeding for the 142nd day, standing and holding back this numerous influx that is trampling the Ukrainian land.

The Ukrainian people hold back the numerous troops of the aggressor, which exceed the number of Ukrainian troops by many times.

Again, the intensity of the fighting in the Luhansk Region and Donbas is increasing. We hear from reports that the enemy is stockpiling weapons and trying to attack peaceful Ukrainian towns and villages even harder. The fire, which seems to be brought from the sky by Russian aviation and Russian artillery, does not distinguish whether it is military or civilian, whether it is a child or an old man. It is a scorched earth war.

Our Mykolayiv shuddered this morning. A massive rocket attack was launched on this city and Mykolayiv universities were destroyed. The enemy is destroying the culture and education of Ukraine. But the Ukrainian people are crying most of all today for the innocent victims of Vinnytsia. Yesterday, the central square and streets of Vinnytsia were covered in human blood. Three Russian missiles hit the city centre, the most crowded place of this regional centre, where there is a medical facility, a maternity hospital, and other life support facilities. 23 people died, many more are missing. And among them, three small children died. Yesterday we saw these lifeless children’s bodies in the arms of grief-stricken mothers. State terrorism reveals its disgusting, ugly maw today over the skies of Ukraine.

But Ukraine is standing. Ukraine is fighting. Ukraine is praying. And this angers the enemy even more, who feels his own powerlessness and, as the people say, rages at his own weakness, because Ukraine is learning to defeat evil.

And together we get to know this treasury of Christian wisdom of spiritual struggle every day. Today I would like to reflect with you about another one of the main sins which is a very violent passion that sometimes breaks and destroys the human person. This passion, this sin, is vanity. And the virtue that can be used to overcome, to eradicate, and to heal this weakness is humility.

Vanity, as the word itself says, the very name of this trouble, is a passion for earthly human glory and all kinds of honours. And the benefit of vanity is a person’s dependence on the opinion of the surrounding people and absolute disregard or forgetfulness of the glory of God, which a person always receives when he does good. Vanity has many different forms and different means, but all this only feeds one’s own self and is the cause of destruction and contempt for one’s neighbour. Attachment to earthly glory makes spiritual growth and even normal human psychological development impossible. John Chrysostom very aptly describes such a vain person who is affected by this passion. He writes as follows: “If you expect resurrection and eternal reward, then why do you seek glory in a temporary, transient life? Thus, the cause of all troubles is vanity. It would like to put its own name even on fields, baths, and buildings. What is the use of all this, O man, if soon, when the fever strikes you and the soul departs, you remain naked and forsaken?”

So, earthly glory passes very quickly. But the virtue of humblemindedness shows the wisdom of one who has the virtue of humility. It is the wisdom of Christ, the wisdom of humility that we see in the face of our Saviour Jesus Christ, that is the power that enables a person to recover from this weakness and receive the crown of God’s glory. That is why a person, a wise person, seeks first the glory of God, not human glory. Therefore, Christ says: “Seek first his kingdom and his righteousness, and all these things shall be yours as well” (Matthew 6:33). And Isaac the Syrian says that being humble and wise is a feature of the divinity in which our Incarnate Saviour clothed Himself.

Listening to this ancient Christian wisdom, today I want to thank all those who do not seek earthly glory, human praise, or rewards when they defend their homeland, because they simply do good to their neighbours during war. This kind of humility is the key to defeating the enemy, who is really trying to bring hundreds of millions of innocent people to the altar of this idol of vanity of some group of people who would like to call the whole world by their name.

May God’s wisdom in man’s humility overcome man’s folly, which seeks vain glory in this passing world. I want to thank all the donors who help Ukraine so generously, but who ask that their names remain anonymous. Because they really love God’s glory more than human glory. As Christ says, let your right hand not know what your left hand is doing, and vice versa.

O God, bless Ukraine. O God, give us wisdom, strength to learn to defeat evil daily. O God, bless those who weep and suffer. O God, save Ukraine and her children.