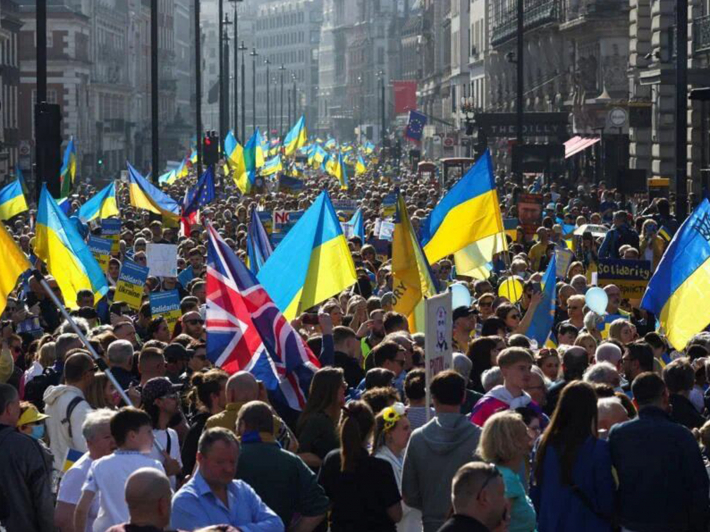 Today is already 31 March 2022. Ukraine is experiencing, suffering, standing for 36 days of the terrible war, the patriotic war, which began with the invasion of Russian troops on the territory of our homeland.

But Ukraine is standing. Ukraine is fighting. Although this brings great sacrifices to this altar of independence and freedom of her state, her people.

One could say that yesterday was a day particularly blessed by God. Our military slowly liberates cities and villages of our homeland. Yesterday, throughout the day in Kyiv’s suburbs we experienced strong explosions. But this night, thank God, passed quietly. Our army is pushing the enemy away from our capital. And we hope that, with God’s help, we will be able to defend our homeland. With God’s help and with the support of the whole world.

Every time we understand more deeply that this ability of the people to survive belongs to a certain spiritual level, a much deeper level of spiritual and moral struggle. We see how these rules of spiritual warfare are today the secret of the stability of the Ukrainian people.

We know very well that every Christian, by the power of the Holy Mystery of Baptism, is already called to fight, to fight evil. The Apostle Paul says that “we are not contending against flesh and blood, but against the principalities, against the powers, against the world rulers of this present darkness, against the spiritual hosts of wickedness in the heavenly places.” [Ephesians 6:12] And he calls us to put on the helmet of salvation, the garment of faith, to take up the spiritual sword, which is the Word of God, with which we can defeat all our enemies.

And the Christian tradition, particularly in the Christian East, gives us examples, examples of such an ascetic attitude. Among the monastic struggle we saw some ascetics who were precisely an example of such endurance, in particular those “stylites” who lived on pillars and “kalybites” who lived in huts. They stood despite the cold or heat, rain or snow, and by standing, standing before God, they defeated the devil. Their example is extremely important for us, for us in Ukraine today. Spiritual standing means the strength of the spirit, which gives the opportunity to be yourself. “To be human in inhumane circumstances,” as His Beatitude Lubomyr would say. Not to be like a weather vane who changes his moral and spiritual attitude in accordance with certain benefits or social and political winds.

To endure in standing and to be yourself! This is one of the types of spiritual struggle. And today Ukraine stands. And everyone who leads this struggle feels that it is possible to resist the overwhelming enemy only through the power of the grace of the Holy Spirit. And that is why we stand in prayer. In prayer and action. Through doing good works of charity in order to help those who need it.

I call upon the whole world to stand. To stand before the attacks of evil. To stand in the face of attacks of falsehood. Because every war is accompanied by a great lie. I urge everyone to stand with Ukraine.