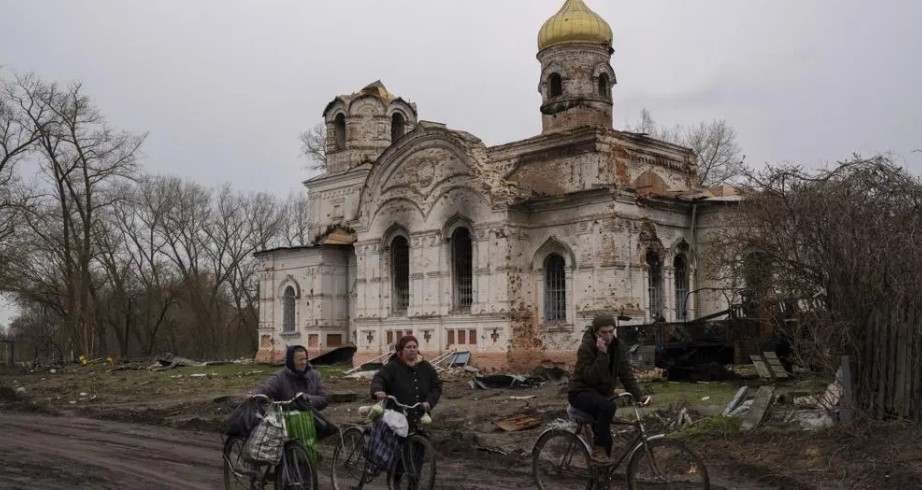 A single metal cross remains inside the church of shattered brick and blackened stone. Russian soldiers used the house of worship for storing ammunition, residents said, and Ukrainian forces shelled the building to make the Russians leave.

There was no Orthodox Easter service here Sunday in this small village in northern Ukraine.

One of the church’s golden domes was blown off. Its gilded cross is propped up against an exterior wall.

The church in Lukashivka, a village near the city of Chernihiv, survived World War II and the most austere years of the Soviet Union, a time when authorities stripped it of its religious icons, residents said.

This time, locals think it will take years for the church to recover its past beauty.

Its bells fell onto unstable ground that is littered with ammunition casings and cans of Russian tinned meat. A stand for candles remains, along with a dented teapot and a pasta strainer.

Outside, the finned part of a rocket is stuck in the mud.

Villagers have vowed to rebuild, whatever it takes. They’ve already started on their own homes, even as they wait for basic services to resume.

There is no gas available to bake Easter bread. At a bend in a road, a military chaplain, Volodymyr Vyshyvkin, and volunteers handed out food and verses.

Remember, Jesus was resurrected, the chaplain told them. Ukraine will do the same. He called on the villagers to pray for those on the front line in places like Mariupol, a southern city the Russians are determined to take and continued to bomb Friday.

“I was telling the Russians, ‘You will stay in this land as fertilizer. If you want to kill me, kill me.’ They looked ashamed,” she said. “I think they don’t believe in God.”

Golyak said she also told the Russian soldiers that she had lived her whole life without war and had expected to die the same. Instead, the soldiers damaged or destroyed almost every village home. And the church had been beautiful, she said.

But she celebrates new life, too. Her daughter gave birth in a village basement during the Russia occupation. On Saturday, the baby girl will be 1 month old.

She was named Victoria.