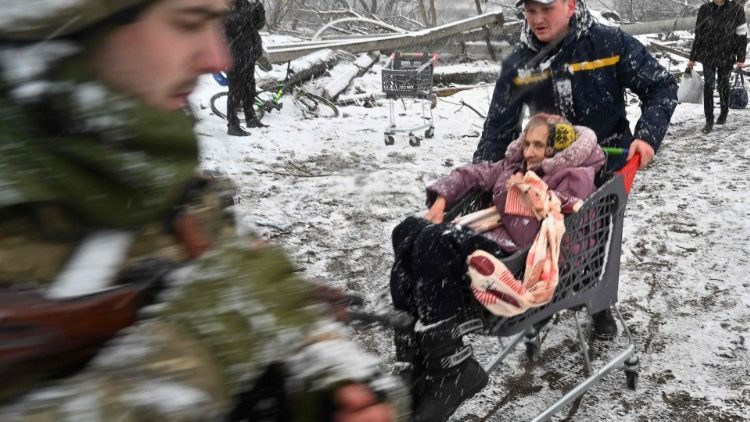 Mine is a journey of prayer, prophecy and denunciation. I leave Rome on March 8 to reach Budapest and I will continue by meeting refugees and displaced persons, and those who welcome and assist them. Meanwhile, Card. Konrad Krajewski, papal almoner, has already reached Poland and will do the same in the regions on the border with Ukraine. The hope is that we can cross the border in the following days and enter Ukraine, but this will depend on the evolution of the situation. The Holy See – Pope Francis said it with great force in the Angelus of Sunday, March 6 – “is ready to do everything, to put itself at the service of this peace.” Of this willingness my mission in Ukraine is a sign and my task is to bring to those who suffer the presence and closeness not only of the Pope, but of all the Christian people.

I go to see directly what the situation is, and I hope to be able to bring some material help, but I go above all to meet people, to be with them.  This is the prophecy of a presence and a closeness that may appear weak, even insignificant according to the logic of the world and the force of arms. However, this is not the case; being close to his people, to his children who suffer, is the way that God has chosen to enter into the history of the world, even at the cost of ending up on the cross. A symbol of this style of God is the great wooden crucifix that in recent days – we have all seen the images with emotion – was moved from the Armenian Cathedral of Lviv and taken to a bunker in the hope of saving it from the fury and madness of war. Just as in bunkers, cellars and even improvised shelters there are many people who address their prayers to that crucified Lord.

For this reason I am sure that mine will be a journey of prayer: the Pope’s, mine and that of my two companions, one from the Dicastery for Communication and the other from the Dicastery for Promoting Integral Human Development, that of all those who will accompany us in this way, but above all the prayer of the people we will meet, a prayer that – as the book of Sirach teaches – “pierces the clouds”, because God “hears the grievance of the oppressed.  He does not forsake the cry of the orphan, nor the widow when she pours out her complaint.” These people share the gift of their closeness to God with those who meet them, with those who are willing to live the sacrament of their presence, bringing the word of the Gospel and concrete support. The gesture of charity of those who welcome them becomes an opportunity to corroborate the faith that unites us and nourish the common hope that a world without war is possible, that violence and death do not have the last word.  This is the mystery of Easter for which we are preparing this Lent.

For this reason, I will meet and bring the closeness of the Pope and the Church also to the people engaged, in so many different ways, in actions of welcome: a silent and unarmed army, committed to rebuilding that humanity which weapons try to destroy. Their hands are the hands of the whole Christian people, indeed the very hands of God.

Faith is not absent from the tragedy Ukraine is experiencing, because it is in the hearts of the people fleeing the war: most of them are believers, as are many who welcome them, and it is important that all those who wish to receive religious assistance should be able to do so, while respecting the differences between the various confessions and religions. In my journey I will also strive for this.

Finally, mine will also be a journey of denunciation. The story of the Ukrainian refugees is well known, unfolding according to the dramatic script of too many conflicts that bloody our world, often forgotten. With the same rapidity with which in a few days millions of people have had to abandon their homes, news is already coming in that the machine of human trafficking and smuggling of migrants has been set in motion at the borders and in the countries of first reception.  To the drama of war and displacement is added that of slavery. In the mission that our small delegation will carry out, we will pay great attention to this issue, as well as to another equally painful point: the marginalization and sometimes rejection suffered by Africans and Asians who lived in Ukraine and are now fleeing together with the rest of the population. This is a difficult issue to address at such a tense time, yet extremely urgent. We are all children of one Father and brotherhood knows no borders: this is the meaning of the embrace of the Pope and of the Church that I bring to all those I will meet.