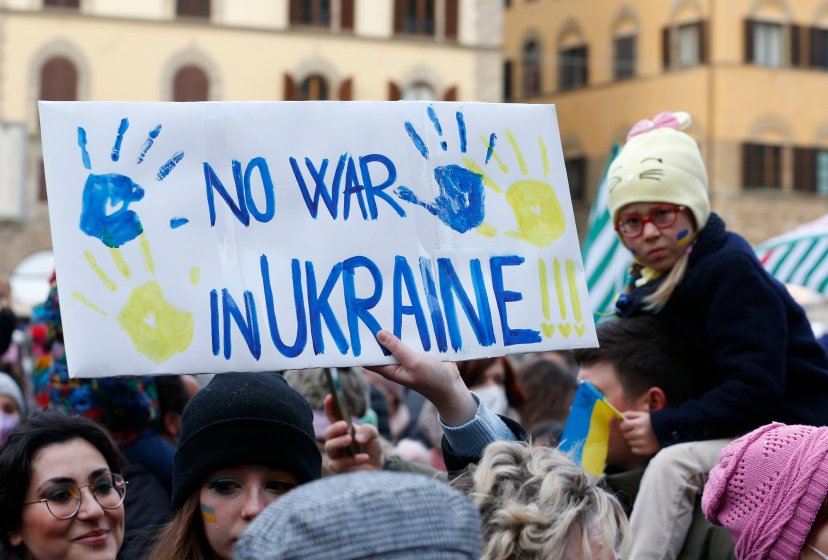 Just before Cardinal Timothy Dolan of New York left St. George Ukrainian Catholic Church in lower Manhattan on Feb. 27, he put his arm around Bishop Paul Chomnycky of the Ukrainian Catholic Eparchy of Stamford, and said, “you let me know how we can help.”

The moment between the two prelates encapsulated what was an emotional 8 a.m. Mass at St. George’s that had just concluded. Chomnycky led the Mass. Dolan was there as a sign of solidarity and concern for Ukrainians in New York and abroad.

In remarks at the start of the Mass, Dolan encouraged parishioners to persist with prayer.

“You are a strong, independent country. You are filled with people of faith and honor. Your families, your friends, at home suffer and you suffer with them,” Dolan said. “Worldly leaders might let us down, but the Lord never will and when you and I don’t know where to go, what else do we do? We pray.”

More than 100 people came out for the Mass, which was the first Sunday Mass at St. George’s since Russia began its invasion of Ukraine earlier in the week. Dolan entered the church around 7:45 a.m. He greeted parishioners as he made his way to the altar – hugging and speaking with some that were emotional along the way.

Chomnycky told Crux after the Mass that Dolan’s presence was huge for the Ukrainian community. New York City has the largest Ukrainian population in the U.S., at about 150,000.

“It is very significant because it shows that we’re not alone, that we have good friends, and friends who will support us and are standing with us and especially at a time like this it is important to know that there are good people on this earth who understand truth, justice, and want to help Ukraine achieve it,” Chomnycky said.

Dolan, in his remarks, told parishioners the archdiocese is “giving you our love and support.”

When Dolan was asked afterwards what message he has for Ukrainians the cardinal flipped the question and spoke about the message they’ve sent him. He called them a brave, honorable, strong, independent people that love their country, their God, their faith, and their independence, which has inspired him.

“There’s an older lady in there who just said to me, ‘They are fighting blind. We are fighting filled with life and light,’ and they gave a message to me,” Dolan said. “That’s why I love them and respect them. God is saying to them ‘I’m on your side, and you’re on mine.’”

Chomnycky spoke about the challenge for Ukrainians in the U.S., particularly New York, that feel “hopeless” from a standpoint that they don’t know how to help their family and friends back home. He said that people can help by speaking out about the truth of what’s happening in Ukraine, and participating in donations that send aid. Chomnycky though, like Dolan, said the best thing people can do is continue to pray.

“That’s what we have to do,” he said. “Prayer can bend steel and that’s our hope.”

As for the situation itself, Chomnycky said he’s surprised this could happen in the 21st century, calling Russian President Vladamir Putin a “deranged individual” and making the argument that if it weren’t for the Russian president none of this would happen because he feels “the majority of the Russian population does not agree with this.”

He also took aim at the Russian Orthodox Church for its complicity.

“They have to be prophetic and they’re not being prophetic,” Chomnycky said. “They’re being tools of the ruling government and the role of the church is to be prophets in our society to show the truth and the light and if you kowtow to the powers that be you’re not being a prophetic voice, and I’m afraid they have lost that gift of prophecy.”

Archbishop Borys Gudziak of the Ukrainian Catholic Archeparchy of Philadelphia made similar comments to Crux about the Russian Orthodox Church late last week. Gudziak lamented that its leader, Patriarch Kirill, praised and greeted Putin and the Russian military last week at the same time they invaded Ukraine. Gudziak also noted that many of the people who will die because of the invasion are members of the Moscow patriarchy that live in Eastern Ukraine.

“So it’s a Russian speaking of the Russian patriarchy that is being killed and the patriarch celebrates the killer,” Gudziak said. “It’s scandalous.”

Dolan closed his remarks to the faithful reminiscing about his trip to Ukraine for the opening of the Cathedral of Kyiv, noting that it’s apropos that it was named “The Resurrection.”

“The people of Ukraine have been through the crucifixion, and are going through it again, but you always inspire us because of your belief in the power of the resurrection,” Dolan said.