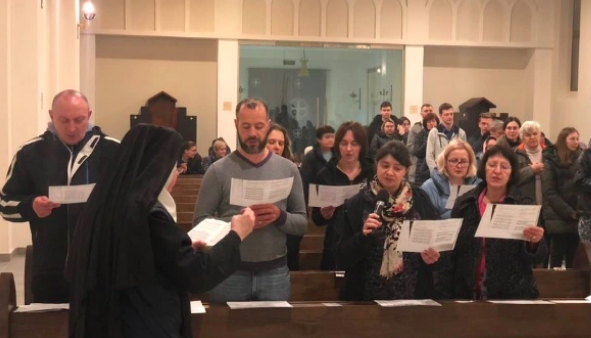 International charity Aid to the Church in Need has announced its approval of a special emergency relief package benefiting Latin Rite nuns in the Ukrainian archdiocese of Lviv, who have opened their doors to refugees fleeing war.

In their April 19 website announcement, Aid to the Church in Need (ACN) did not disclose how much the relief package was worth but said one of the recipients of the package are the Benedictine nuns of Solonka, a contemplative community that opened their doors to refugees fleeing war in Ukraine.

Since the war broke out in February following Russia’s invasion of Ukraine, the Solonka sisters have welcomed hundreds of needy families, estimating that more than 500 people have been through their monastery so far.

According to one nun in the convent, identified by ACN as Sister Klara, “During the first few weeks of the war there was a lot of movement in our monastery.”

“People came from many different cities in Ukraine…It was mostly women and children, accompanied by their husbands who would help their families cross the border, before returning to fight for their country,” she said.

Most of the monastery’s 75 current inhabitants are people who are not planning to go abroad, and some no longer have homes to return to, as they were destroyed by shelling or missile blasts.

Among the guests in the Lviv monastery are sisters belonging to the order’s community house in Zhytomyr, who were forced to evacuate after spending several days in a basement shelter beneath the city’s cathedral.

To keep their guests’ minds off of their traumatic experiences, the nuns have enlisted their help in performing daily chores, such as cleaning the monastery, or working inside the kitchen or dining hall.

The room of one of the nuns has been converted into a playroom for the 20 children who are staying there.

According to ACN, one family currently housed in the monastery consists of Roman, Anna, and their two small children, one of whom is just a month old.

Originally from Kharkiv, the family packed their bags immediately when the war began Feb. 24, but lingered for around 10 days before finally deciding to leave when their building was hit by a Russian rocket.

“The house caught fire, all the windows were blown out,” Roman told ACN representatives. Their neighbor’s house was also hit, causing even more damage.

The family thought they would be unable to leave due to the thick black smoke surrounding their house, but they grabbed their bags and made it out to the street, where people were running in every direction, trying to get as far away from the building as possible in case a gas line exploded.

Once outside, they walked for a while before waving down a car that gave them a ride to the house of a friend’s mother.

“But there were bombings there as well, especially at night. It was awful. We couldn’t sleep and the kids were getting nervous,” Roman said. So, they decided to travel to Lviv, in western Ukraine, by train with other refugees.

However, when they arrived, the city was overcrowded and there were no rooms available anywhere. Anna briefly found a place to stay at a home for mothers and children, but she did not like staying in a place that was so crowded, especially with such a young infant.

Exasperated, the family finally sat down on a bench by the train station one day in the cold wondering where to go next and where to find warmer clothes for the baby, when one of the Benedictine sisters from the Solonka community, identified as Sister Hieronima, came up and offered them shelter at the monastery.

“We will remember this moment, and be grateful for the rest of our lives,” Anna said, recalling how Hieronima later told the family that she had not planned to go by the train station that day, but felt a tug telling her to go and see if anyone needed help.

“It was divine providence. A sign from God!” Anna said.

While the nuns made vows for a contemplative life, removed from the world, Sister Klara said the community believes what they are doing is God’s will.

“This is how our community of nuns and monks reads the signs of the times, and this is how we envision our service now,” she said, noting that most of the refugees who stay with them are not believers, but some join them for prayers.

“During the feast of the Annunciation we celebrated the wedding of an elderly couple from Zhytomyr in our church. Another young couple from Kharkiv is preparing for the sacraments of reconciliation and marriage and will also baptize their son. Several people have made their first confession,” she said.

Yet despite their new busy routine, Klara said prayer is still the foundation of their daily lives. Not only have they maintained their schedule of common prayer, but they have increased the hours for adoration of the Blessed Sacrament for themselves and those who wish to pray.

Since the war began almost two months ago, around 4.9 million Ukrainian refugees have fled to neighboring countries, while an estimated 7.1 million people are internally displaced, including some 2.8 million children, according to UNICEF.