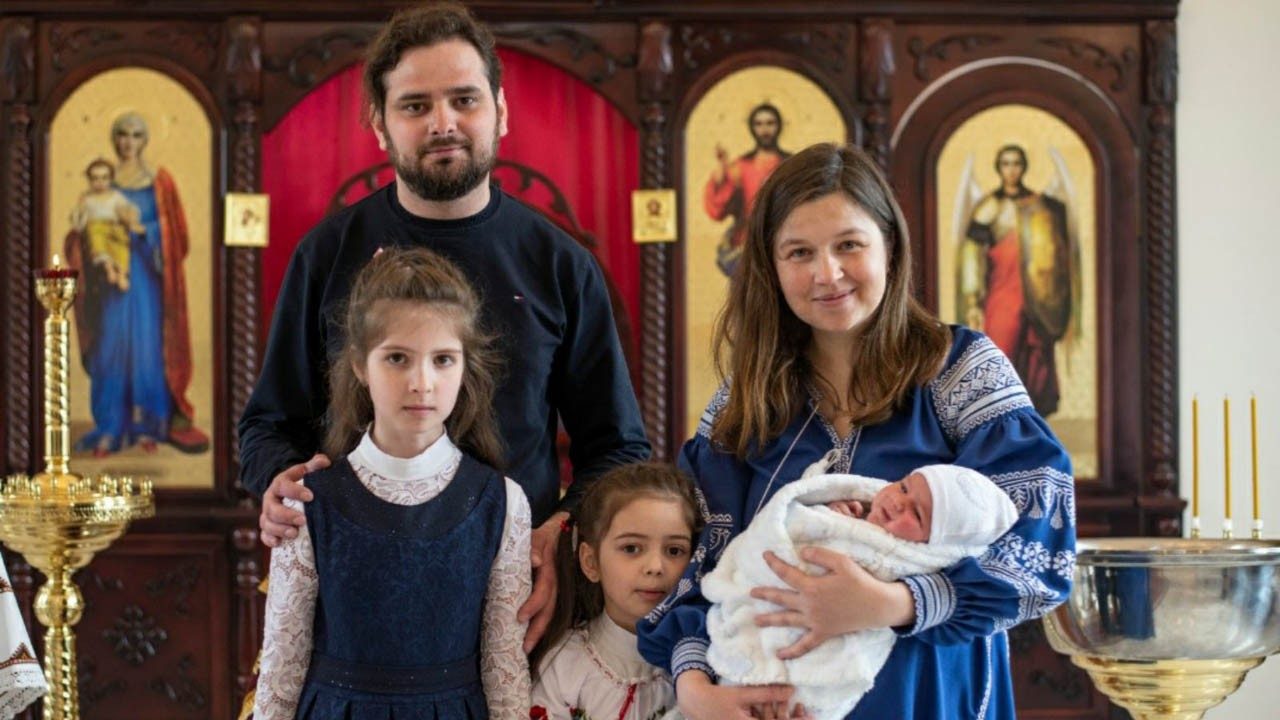 The Ukrainian town of Slavutych is tied to a historic event. It was founded 36 years ago, a few months after the Chernobyl disaster. Power plant workers and their families, who had lived near the facility in Prypyat’, settled here.

The current situation created by the war has once again demonstrated the courage and steadfastness of the people of Slavutych. The town, located less than 20 km from the border with Belarus, was surrounded by Russian troops on the first day of the war, February 24. The next day, the Chernobyl nuclear power plant was also seized. On March 31, the Russian army left the power plant and retreated from the northern part of the country and Slavutych. Throughout the blockade of Slavutych, a young Greek Catholic priest, Yuriy Lohaza, provided spiritual support, comfort, courage and help to the townspeople to find and distribute food and necessities.

“In Slavutych remains our young priest with his wife, who a week ago gave birth to a child in a hospital where there was no light or heating, and because it was night, there was only candlelight,” said His Beatitude Sviatoslav Shevchuk during a video conference on “The role of the Ukrainian Greek Catholic Church in the context of war,” held by the Pontifical Oriental Institute (Rome) on March 29, 2022. His Beatitude Sviatoslav spoke about Father Yuriy Lohaza and his wife Iryna. “I’m really sad,” he continued, without holding back tears, “and I’m worried about this child’s survival.” Born on March 15 and named after his father, Yuriy, the boy is healthy and safe. When it became possible, the mother brought the baby and his two older sisters to her native village in western Ukraine, and Father Yuriy stayed in Slavutych to continue serving his community.

In the interview for Radio Vatican, Iryna shared her story about the most challenging moments of her tragic experience:

“We have been under occupation since February 24. Our city was occupied at the same time as Chernobyl. But for me, the most challenging turning point was when my husband, a military chaplain of the National Guard, left to join the guys on the front line, and we were left alone. I was alone at home with three children, with a baby who was only a week old. At that time, the active shelling of Slavutych began. The fighting was not in the city but on the outskirts. However, since our town is tiny, with all the sounds, it seemed to be very close. It was very difficult when my eldest daughter came up to me and said, ‘Mom, I don’t want to die.’ I didn’t know what to say to her because I didn’t know what would happen next.”

In those darkest moments, Iryna drew strength from the faith she had been instilled with as a child.

“The feeling of the presence of God is unique in such difficult moments. Of course, it is impossible to pray as usual, when it is peaceful, safe and calm. This is a slightly different prayer. It is personal and perpetual. You forget about the sleep and just trust the situation to God. I remember praying when the children fell asleep, whether at night or during the day when the sirens were on. And this prayer supported me.

Also, there was much support from friends and acquaintances. Many people asked: ‘How can we help? How to get you out? Maybe you need money?’ And I had one answer: ‘Pray.’ Prayer gave me strength: my own prayer and the prayers of all those who worried about us. It supported me when my hands were already falling (not sure what this means—I think falling might not be the right word here; perhaps “failing.” “…my hands were already failing?”) or when the understanding of how to endure, what to do, and where to run, disappeared. The Lord was watching over us every second. This is the only thing that gave me strength. Because when I look back, it’s difficult in many moments. But prayer—it kept me going. Trust in God kept me going. I am happy that I have my faith because I was held by it in one of the most challenging moments of my life. I was held by prayer.”

Iryna Lohaza talks about how she and her husband decided to stay with people in Slavutych. The residents of the city were grateful to Father Yuriy for staying in the town and continuing to celebrate Liturgies, confession and help those in need:

“My husband and I talked about it before the invasion. We considered our actions if something happened, but we were always convinced that we would stay in our city until the last moment, for as long as possible. Our opinion was not changed because we were expecting a baby boy or that we already had two children. Of course, when hostilities broke out, attitudes changed somewhat. It is one thing to know from pictures, stories and movies, and another thing when the war comes to your city, to your country. When it takes lives and does terrible things to your people. Of course, it was scary and perilous, but we never regretted it. The only thing is that we thought about finding a way out because of the children.

My husband knew that no matter what happened, he would stay with the military, with the city, with the parish. Many people were very grateful to him for staying in the city.

During the occupation, people constantly came to him. Yuriy celebrated the Liturgy every day. Many people came to confession. Some confessed for the first time in their lives.

Many people came to the service, even though air raids were heard, and the city was under occupation. It did not stop them. Residents of the city approached, hugged, and thanked him for staying in the city. And I think that if such a difficult situation arose again, the choice would remain the same – to be with people to the end.”

Fresh air, communication and games with peers, distance learning, drawing, prayer and sincere conversations—all this, as Iryna notes, helps her daughters to calm down after the experience of the war in Slavutych.

“I see that kids are adapting quite quickly. Their minds are flexible. They perceive various things, experience them, and move forward. But of course, during the first days, they were terrified. I remember our first descents to the bomb shelter. My eldest daughter was more aware of what was happening, she was anxious, scared and slept poorly. When we arrived here, the adaptation was happening during the first days. Now I observe that fresh air, friends, cycling and walking have calmed them down, they returned to their usual rhythm.

Distance learning has resumed, and as a result, the kids now feel more a part of their usual society. We also try to pray together, to draw, talk about our emotions and worries. In the children’s drawings, I see that bright colors prevail, peace prevails. They also share that it is very good that we are here now, secure, that we hear no more sirens, shootings, or explosions. And, of course, such an environment influences the kids. It calms them down. But then again, I think that a particular imprint of war will remain with us. Deep down in our hearts, some things will stay with us forever. But then again – kids let them go faster, and it’s easier for them to move forward.”

Did you ever think you would have to make such difficult decisions as in the last two months? Iryna, while responding, also recalled her decision to go to the north of Ukraine with her husband almost ten years ago:

“Such decisions that I had to make last week – probably no. We got married in peaceful times in 2012. Everything was like in a fairytale – romantic and beautiful. But before getting married, we decided to go to the missionary territories. Of course, it was a challenge to cross the whole country. I knew that I would always support my husband and always be with him during good and bad times. I always understood that I must be close by and live every moment with my husband. But over this last month, I have been saying to my family sometimes that I am already tired of goodbyes. That’s maybe the worst.”

Concern for the health and safety of children prompted Iryna to move with them to estern Ukraine, experiencing separation from her husband. He remained in the city, which had already become her home. She is aware of her husband’s vocation and is convinced that war and hardship have further strengthened their relationship:

“The responsibility for the children’s lives made this choice very difficult for me. For him, there is no choice between the parish and the family because first, he is a priest, a person whom God has called. There is no doubt. But for me, as a mother, I had to leave the city with our children. Leaving my husband behind and going away, even if it was to western Ukraine, was already a big challenge for me. I had to leave the city, where, despite all the danger, I felt good because all of us were together there. Now I am physically secure, but my heart remains with my husband and my city. I am delighted that my husband is a priest. I am ready to be with him both in good and bad times, in any situation. And the war has shown that our relationship becomes stronger in such difficult moments and that we are ready to be together even at a distance, to fight and support one another.”