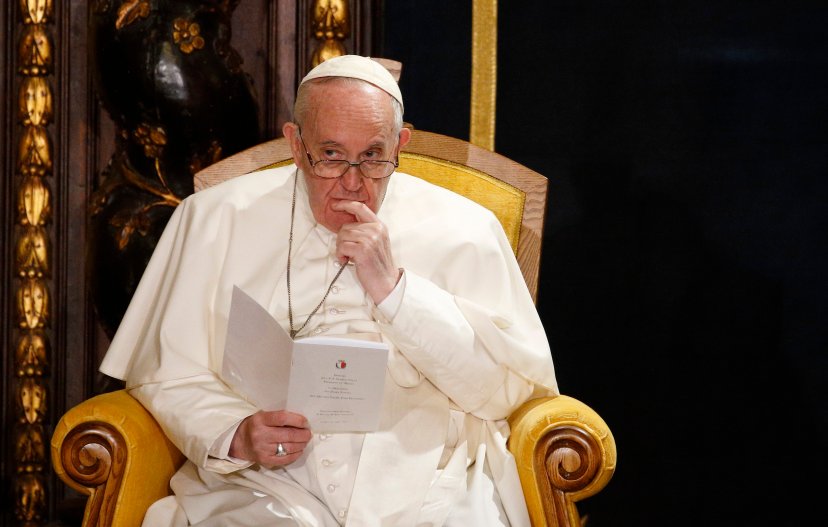 While reiterating that a possible trip to Ukraine was “on the table,” the pope said it remained uncertain.

“I say with all sincerity I would like to go. The willingness is always there, there isn’t a ‘no,’” he said. “If it can be done, I must do it. This is all up in the air.”

Archbishop Visvaldas Kulbokas, apostolic nuncio to Ukraine, who has stayed put in Kyiv during the war, said a papal trip is uncertain.

Speaking with SIR, the news agency of the Italian bishops, the prelate had said earlier that “all possibilities are open,” and that from the beginning of the conflict “the pope has said he is ready to do everything possible. He has said it several times and he is doing it and it is clear that he is doing everything that can help stop this war.”

Francis has publicly spoken about the war in Ukraine at least 18 times since Russian President Vladimir Putin ordered his army to invade the country on Feb. 24.

On March 25, at the urging of the Ukrainian bishops, he consecrated both Russia and Ukraine to the Immaculate heart of Mary. Shortly after the invasion began, the pontiff visited the Russian embassy to the Holy See; spoke on the phone with Zelenskyy and held a videoconference with Patriarch Kirill, the head of the Russian Orthodox Church.

In addition, he dispatched two cardinals to Ukraine as his personal envoys and tasked the Vatican’s diplomatic apparatus with working for a peaceful resolution to the crisis.

On March 23, Cardinal Pietro Parolin, the Vatican’s Secretary of State, met with the Russian ambassador to the Holy See, Aleksandr Avdeev. According to Italian newspaper Corriere della Sera, among the things they discussed was the possibility of a papal visit to Ukraine, a prospect the Moscow regime viewed as “a gift to the United States.”

On Saturday, while in Malta, Francis voiced his harshest condemnation of Putin, even though he refrained from saying his name.

“From the east of Europe, from the land of sunrise, the dark shadows of war have now spread,” the pontiff said. “We had thought that invasions of other countries, savage street fighting and atomic threats were grim memories of a distant past.”

“Once again, some potentate, sadly caught up in anachronistic claims of nationalist interests, is provoking and fomenting conflicts, whereas ordinary people sense the need to build a future that will either be shared, or not be at all,” Francis said.

Speaking about Kyiv, Kulbokas said that the nights without bombardments “are rare,” though by noon on Saturday, he said, the Ukrainian capital had gone 36 hours without an artillery bombardment.

However, as Ukraine reclaims areas that had been occupied by the Russians, images of hundreds of murdered civilians were shared by international journalists.

Ukraine’s foreign minister said Sunday that Russian troops executed civilians while withdrawing from regions “out of anger and just because they wanted to kill.”

Dmytro Kuleba, Ukraine’s minister of foreign affairs, branded Russia “worse than ISIS” and said it is possible its military actions could amount to genocide.

Kulbokas said the director of the largest pediatric hospital in Kyiv told him on the phone that “they are treating children, some of whom the military has shot with predetermination to the head, so it is not a question of wounds due to shots received by chance but of soldiers aiming at the child and shooting him in the head.”

Russia’s invasion of Ukraine, he said, has gone “outside all the boundaries of humanitarian law.”

“War produces these facts,” he said. “War is always to be condemned because we touch all the brutalities it produces.”

Kulbokas also said that everyone in Ukraine supports a papal visit to Kyiv.

“There is no one here who does not want a visit from the pope,” he said.

“Humanity is incapable of resolving this war,” he told SIR. “Here, it is no longer about the pope. In my opinion, all of humanity must unite, huddle together and do everything possible to stop not only this war but all the conflicts in the world.”

“A war like this, who stops it? No one,” Kulbokas said. “The United Nations? They don’t exist. The Security Council? It doesn’t exist. In the end, we are all naked.”

He said unless everyone comes together, “humanity is incapable of resolving this war.”