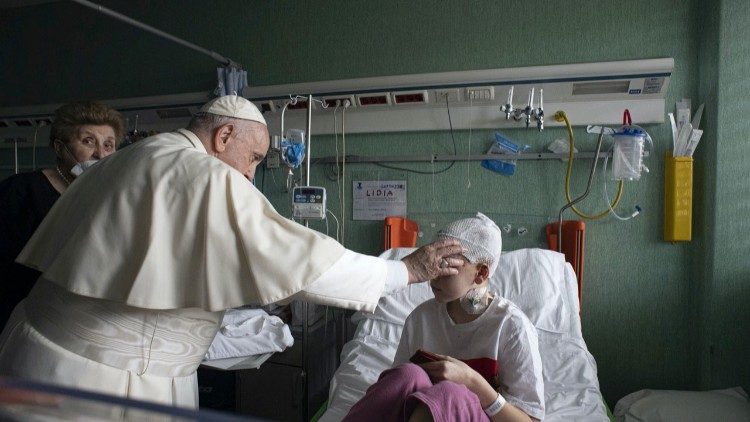 By Benedetta Capelli and Fabio Colagrande

As the Russian invasion of Ukraine disrupts routine medical care in much of the country, the Bambino Gesù hospital has stepped into the breach to assist children in need of treatment.

Around 50 children have arrived from Ukraine to the Pope’s hospital—19 of whom are hospitalized—to receive quality care.

Pope Francis visited the group of Ukrainian children, along with all other patients in the Vatican’s pediatric hospital, on Saturday afternoon, according to the Holy See Press Office.

The children are receiving treatment for various pathologies, including in the oncology and neurology departments.

“The Pope stopped in the rooms, and visited all the little ones present, before returning to the Vatican,” said the Press Office statement.

Separately, on Friday, the Pope expressed his gratitude for this service in a brief, hand-written message to Mariella Enoc, the hospital’s president.

“Thank you for your service, charity, and love for wounded Ukrainian children. I am close to you.”

Dr. Mario Zama, head of Plastic and Maxillofacial Surgery at the Bambino Gesù, is helping treat the children and spoke to Vatican News about his team’s work to heal both bodies and hearts.

He said there are 4 young girls whose lives have been forever altered by the war in Ukraine.

Two suffered the amputation of an upper limb, while two others have been left with severe craniofacial trauma.

Q: As a doctor finding yourself operating and treating war victims, what feelings do you have about this situation?

This time I am experiencing a rather peculiar state of mind, since I’ve already been in contact with war victims: during the Russian invasion of Afghanistan, the war in the former Yugoslavia, and the massacre of Tutsis and Hutus in Rwanda, some of whom had been brought as refugees to our hospital for treatment of wounds sustained in the war.

I had hoped never to have to witness these situations again, but unfortunately here we are again with the same problems in a completely different socio-political framework, one absolutely devoid of any justification, if in any way a war conflict can be justified.

Q: In your relationship with these children’s families, do you think these victims of war have felt welcomed and cared for? In a certain sense, this must be some other side to their dramatic experience…

Absolutely. These are children who have endured absurd traumas.

There is a little girl who was fleeing with her father and little brother in the car, and was hit by bullets. Her little brother died in her arms, and she herself was struck in the head.

These are absolutely unspeakable and inconceivable situations. What we did as soon as they arrived—beyond the necessary investigations to understand the clinical conditions and establish our next steps—was to try to make them feel safe.

Therefore, they were assisted by psychiatrists, and then everyone around them tries to help them play. At the beginning they were unable to speak, but now they are starting to talk, smile, draw, and play; in short, they are returning to some sort of “normality”.

Of course, I’m not sure how the psychological trauma they have suffered can be treated.

Q: This type of medical activity is part of the mission of the Bambino Gesù Children’s Hospital…

Certainly. Welcoming is one of the cornerstones of the hospital’s mission: it is the Pope’s hospital.

We all hope that the words of the Holy Father, who called for an end to this massacre, will actually be heard. My fear is that more of these children will arrive, and more will die.

It is difficult then to go back home and to look at your own children; these situations mark you for life.

“We hope the war will end soon”

Despite their own difficult situations, other young patients of the Bambino Gesù hospital have expressed solidarity with their Ukrainian brothers and sisters in their own way.

Many have drawn pictures depicting the colors of Ukraine’s flag, the peace sign, and even the blood and tears of young victims of war, a reality which Pope Francis says should “shake our conscience.”