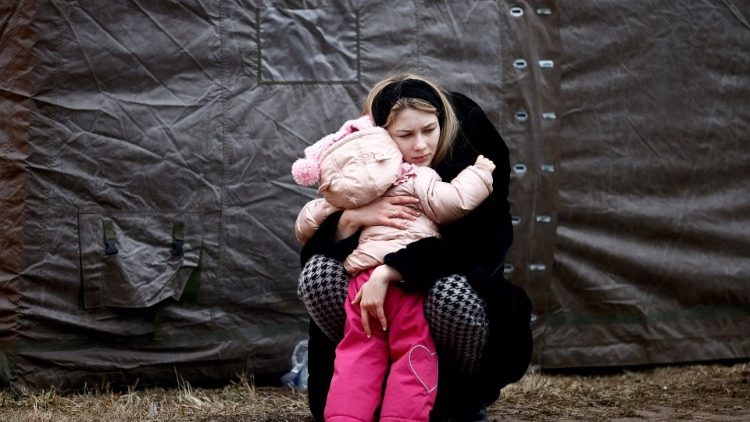 In the wake of the Russian invasion, many Ukrainians feel abandoned. But as the war continues, there has also been an eruption of solidarity with the Ukrainian people, from Europe and around the world. The Pope has called for a day dedicated to closeness with the suffering of the Ukrainian people: “God is with the peacemakers, not with those who use violence!”

Many Ukrainians have felt abandoned in these dramatic days. They do not want to hear about the “price of gas,” because they feel they’ve been sold out. They know that an external intervention could trigger a much bigger conflict, devastating for the world. Belarusian President Lukashenko has even said that sanctions could push Putin towards nuclear war — a scenario we would not even want to think about.

But in the face of the Russian attack and nightmarish threats, solidarity is growing. The invasion of a free country has united Europe as never before. Europe, so divided on so many issues, has never been as united as it is today: it stands by the Ukrainian people. Neighbouring countries have opened their borders to the refugees: Poland, Hungary, Romania, and Slovakia have opened their arms. Other countries are ready to host those forced to flee. Demonstrations and initiatives for peace and solidarity with Ukraine are taking place in Europe and on other continents.

Christian communities, parishes, associations, and Caritas have mobilised to send humanitarian aid in every way possible. President Zelensky said that the Ukrainian people feel the Pope’s support. At the Angelus, Pope Francis reiterated his appeal to silence the weapons, saying that “God is with the peacemakers, not with those who use violence!” and that “ordinary people want peace.” There is such solidarity in the face of images of children, women, and the elderly, who are fleeing on foot or are shut up in shelters, praying with dismayed faces, or who are beside those who have fallen. Now there is hope for negotiations.

There is so much sympathy for the Ukrainians, a people who want peace and have suffered so much. In the 1930s, Stalin starved them because they resisted Soviet policies: several million Ukrainians died from the famine. It is a little-known extermination, the Holodomor, the annihilation of a people by starvation.

Many Russians are ashamed of the invasion. The pro-government media call it a “military operation” or a “liberation” or an intervention aimed at “denazification.” There are many Russians who believe this. But many Russians are demonstrating in favour of peace, against the attack. Many have been arrested. We support Russians who are for peace. We support the Russian soldiers who do not want to shoot at Ukrainians, such as those standing empty-handed in front of a tank. Let us help those Russians who believe in this war to understand where the evil is. But above all, let us not abandon the Ukrainian people.