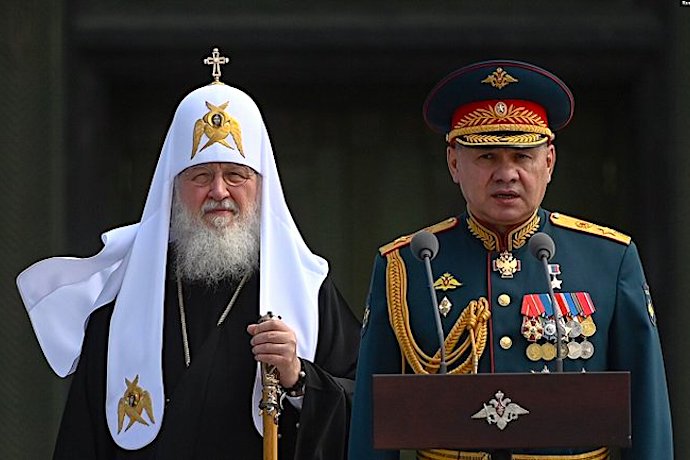 There’s little doubt that Russian Orthodox Patriarch Kirill’s Forgiveness Sunday Sermon last month received more attention than any Orthodox cleric’s sermon has received in the Western media in a long time. Beyond its frightening absurdity, it’s likely this attention is due, in no small part, to its use of culture war rhetoric with which Western audiences are so familiar and about which they are so passionate.

Therefore, it’s not necessarily surprising that yesterday’s sermon, delivered in the imposing and threatening Cathedral of the Armed Forces, is receiving less attention, though this sermon was arguably far more dangerous and might provide critical insight into what will come next for Russia, Ukraine, and the rest of us.

The Fourth Sunday in Lent is dedicated to the commemoration of St. John Climacus (also known as St. John of the Ladder) in the Eastern Christian tradition. Little is known about this early Desert Father, except that he’s the author of one of Christianity’s most important ascetical texts, The Ladder of Divine Ascent. Divided into thirty parts, the treatise is meant to be a guidebook to a Christian life, with topics from lying to the remembrance of death.

Patriarch Kirill ostensibly took St. John of the Ladder and his famed text as the basis for his sermon. And if we’re being frank, the first half of the sermon was fairly benign, if not a predictable, standard sermon from a Christian minister. Kirill even reminded his audience that, “The greatest and holiest feeling God has given to man is the feeling of love.” A sentiment that, tragically, sounds a bit shocking coming from a warmongering patriarch.

But then, about halfway through, the sermon took a turn for the shocking and dangerous. It was at about the point that he acknowledged where he stood: in a cathedral built not so much for the glory of God as for the glory of Russian military might. Here the Patriarch said he had come to address the leaders of their Russian forces, and through them, their troops. He reminded the assembled congregation of Vladimir Putin’s favorite propaganda point in this war: that Russia was fighting fascism in Ukraine just as it had in the Second World War.

And then the Patriarch, whose office was just a few centuries ago (a blink of the eye in the memory of the Christian East) located not in Moscow, but Kyiv, offered up a version of history that simply erases Ukraine from the map. Kirill blames “various forces” (i.e. outsiders, including—one would imagine—the West) that emerged in the Middle Ages for what he regards as a false division between Russia and Ukraine. In fact, he doesn’t even acknowledge there are such people as Ukrainians, referring to all involved parties (including, perhaps, one could speculate, Belarusians) as “Holy Russians.”

Disregarding for a moment how simply, factually wrong Patriarch Kirill’s history is, this sermon does mark a dangerous escalation in the rhetoric coming from the Moscow Patriarchate—and, we can assume, by extension the Russian state. This rhetorical advance is made all the more dangerous by the fact that most in the West won’t even know the sermon happened, let alone be aware of its pernicious implications.

In fact, as of this writing, there doesn’t seem to be a single readily available translation of the sermon online in English and it’s received little coverage by any major Western media outlet (this Reuters article might be the only exception).

It’s understandable why. Patriarch Kirill isn’t deploying the familiar rhetoric of the Culture Wars, “gay pride parades,” and Western decadence. He’s speaking in terms of the obscure history of the Christian East, a history largely unknown in the West. But do not be fooled; what he’s saying is extremely dangerous.

Patriarch Kirill’s sermon on the Sunday of St. John Climacus does no less than refuse to acknowledge the distinction between Russian and Ukrainian culture and identity, and it denies Ukraine’s right to exist as a sovereign nation, both historically and in the present. Furthermore, it legitimizes the ongoing violence as necessary and even, perhaps one could argue, holy.

As the Patriarch says, recalling the words of the Gospel of John, the Russian soldiers are “laying down their lives for a friend.” That’s right. The Ukrainians the Russians are bombing, shooting, and leaving dead at the side of the road are friends. Just like Jesus thought of his disciples. These are the words of a committed nationalist of the imperial variety and a man who thinks nothing of using the familiar words of a faith to their most egregious effect. As we should all know by now, this is a very dangerous combination. When we ignore his words (and when we’re too generous in our interpretation of them), we betray those he’s already harmed and we virtually ensure that he will do worse in the future.